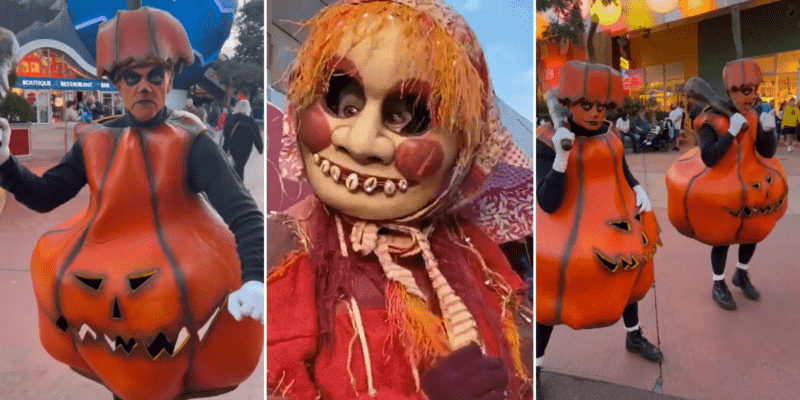 With the Halloween season bringing so many spooktacular offerings to Disney Parks worldwide, one of the latest additions has taken Guests by surprise, as it is not what Disney typically offers in its Parks. Guests are used to being delighted by hauntingly fun decorations, seasonal treats, unique parades and entertainment offerings, and even special events like Oogie Boogie Bash in Disney California Adventure at Disneyland Resort and Mickey’s Not So Scary Halloween Party in Magic Kingdom at Walt Disney World Resort, but this new offering is slightly more unsettling, to say the least, in comparison.

Recently, several Guests captured a few videos of some rather unusual visitors at Disneyland Paris.

WeCanFly-DLRP.de (@WeCanFlyDlrp) shared a closer look at one of these unexpected visitors at Disneyland Paris.

Denise at Mousesteps (@Mousesteps) shared a video of a different group of scarecrow-like figures with an equally unsettling appearance.

There is no official information on these bizarre entertainment offerings happening at Disneyland Paris on the Park’s website, so we don’t have much information on the scheduled appearances of these ghouls at the Parisian Park’s shopping and entertainment district. However, their debut is something worth exploring, perhaps at other Parks worldwide, as many Guests enjoy the experience of interacting with scare actors during Halloween events.

This is not the first time Disney has experimented with more adult-oriented experiences during the Halloween celebrations, as Hong Kong Disneyland once tried to introduce its own version of Universal’s Halloween Horror Nights. You can read more about this bizarre event by clicking here.

What do you think of these bizarre visitors? Would you like to see more Disney Parks worldwide experiment with scare actors? Let us know in the comments below!