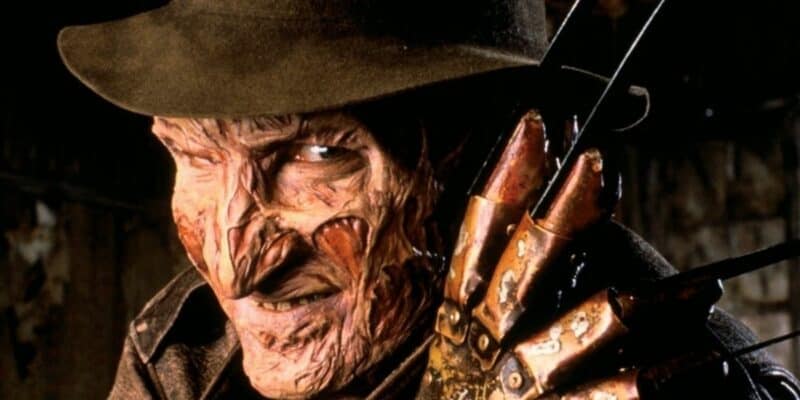 The Halloween season is here, and seeing as we’ve talked at great length about the slasher franchise of the same name, it’s time to cast a lens over another iconic horror series within the subgenre — the A Nightmare on Elm Street franchise.

So here are all the A Nightmare on Elm Street movies ranked from the very worst to the very best.

Starting with the bottom of the barrel, of course, we have Freddy’s Dead: The Final Nightmare (1991), which, as you can guess from the title alone, was touted as the last ever installment in the A Nightmare on Elm Street series at the time.

It’s a promise we’ve heard more times than we can remember in slasher franchises, and though this was the final entry in the main series of films, it was anything but the last time Freddy’s razor-clawed glove would emerge from dreamland (but thankfully, this is the only 3D outing).

As the last Elm Street teens (these are definitely the last ones… we think) return to their hometown to destroy Freddy Krueger once and for all, little do they realize that he has officially become a Looney Tunes character who sits around playing games consoles in his spare time.

Fortunately, the sixth film in the A Nightmare on Elm Street series is preceded by two other dreadful entries, so you won’t experience feelings of total shock or crushing disappointment by the time you get here. All in all, the whole thing still feels like a really, really bad dream…

8. A Nightmare on Elm Street 5: The Dream Child

But where do we start? Well, if we’re talking about positives, then it’s probably worth pointing out that A Nightmare on Elm Street 5: The Dream Child is so bad that it’s worth sticking on in the company of others, and not because it’s scary, but rather that it’s so bad it’s mildly entertaining.

Freddy Krueger actually has a child in this movie (he has invaded the dreams of the final girl’s unborn child or something), and the dreamworld manifestation of said-child is the kid from the original Jurassic Park (1993) — you know, the one who insults raptors at the beginning of the film (Whit Hertford).

7. A Nightmare on Elm Street 4: The Dream Master

While one could easily argue that Freddy’s Dead: The Final Nightmare completely destroyed the original series of films, seeing as its goal was indeed to serve as a finale (one has to ask why), it’s only fair that we blame another entry. Look no further than A Nightmare on Elm Street 4: The Dream Master.

The fourth installment in the A Nightmare on Elm Street is so bad that many fans consider it, along with the two subsequent films, to exist in an entirely separate continuity, in much the same way that countless Halloween fans disregard Halloween: Resurrection (2002) as canon.

What was New Line Cinema thinking when it churned out this cheap, ugly, awful mess of a movie, especially following the success of the brilliant A Nightmare on Elm Street: Dream Warriors (1987)? The short answer is money, and spending as little of it on the project as possible.

But it’s not just the visual quality that’s the problem — A Nightmare on Elm Street 4: The Dream Master is the moment the series became a shadow of its former-self, when Freddy Krueger, a once-terrifying monster, is reduced to what can only be described as a cartoon character.

Throughout the entire A Nightmare on Elm Street franchise, teenagers try to come up with many ways to kill Freddy Krueger — fire, holy water, burying his bones in hallowed ground, bringing him into the real world to kick his butt, taking away his power by not fearing him, and so on.

Did any of these methods ever truly work, though? Not really. We just wish that there was someone to tell these desperate teens at the time that the only way to guarantee Freddy Krueger’s death was for Platinum Dunes to reboot the original 1984 classic by Wes Craven, a film which has seemingly killed the franchise.

For the first time in the franchise’s history (and so far, the last), Freddy Krueger isn’t played by Robert Englund, with actor Jackie Earle Haley stepping into the filthy striped sweater and fedora hat. While some of Haley’s lines are memorable enough, everything else around him is dull and forgettable.

Platinum Dunes did a great job with The Texas Chainsaw Massacre (2003) and Friday the 13th (2009) reboots, but A Nightmare on Elm Street lacks the atmosphere, originality, creativity, terror, and personality of its 1984 predecessor, and has a cast that clearly doesn’t want to be there.

There are probably many fans who hate A Nightmare on Elm Street Part 2: Freddy’s Revenge (1985) just as much as all the films below it on this list. And while we’re not here to necessarily defend it, we will say that, at this point in our ranking, things at least start to look up.

If you like your Freddy movies to adhere to a certain structure (i.e. Freddy lays waste to teens in their dreams), then this isn’t for you. But if you’re after something a little weird but equally dark, and which still has that “Elm Street” atmosphere, then there’s some fun to be had here.

With all that said, the first sequel in the A Nightmare on Elm Street series has far more cons than it does pros. For starters, reducing Freddy Krueger to a monster who requires a vulnerable host whom he must possess in order to start killing breaks all the rules established in the original film.

In hindsight, though, there’s something admirable about shaking up the formula — even this early on in a franchise — especially when you look at how things pan out after just the third installment. In short, this sequel definitely isn’t the worst of the series. Unfortunately, it isn’t the best, either.

Ever since the razor-fingered glove of Freddy Krueger was seen dragging Jason Voorhees’ hockey mask to hell in Jason Goes to Hell: The Final Friday (1993), fans waited a long time before seeing the inevitable crossover movie event. But in 2003, their dreams (or nightmares) finally came true.

Freddy vs. Jason (2003) sees Freddy Krueger and Jason Voorhees (Ken Kirzinger) team up, as Freddy, who has long since been eradicated from the memories of the Elm Street children as a result of the parents suppressing their ability to dream, uses Jason to help him regain his power.

However, once Jason gets a little too bloodthirsty, taking all of Freddy’s would-be-victims, the dream demon decides to try and stop the Camp Crystal Lake-dweller himself. So, as the title suggests, what could have been a beautiful bromance movie quickly goes south.

If you can look past the fact that this “MTV” movie is dumb fun, there’s a ton of fun to be had with Freddy vs. Jason. And despite the fact it has a character from another slasher franchise, somehow, it winds up being a half-decent follow-up to A Nightmare on Elm Street 3: Dream Warriors.

The original A Nightmare on Elm Street (1984) by the late legendary horror director Wes Craven is not in our top spot! Sometimes, it seems all too easy to place the original film in any franchise in first place, and though of course many deserve it, we don’t think this horror classic does.

The third spot on our list isn’t a bad place to be, though, and there’s no escaping the fact that the original A Nightmare on Elm Street is a classic. Sure, it’s not John Carpenter’s Halloween (1978) and doesn’t have a particularly well-known final girl or score, but it’s still the stuff of nightmares.

Heather Langenkamp shines as Nancy Thompson, who quickly begins to unravel as Freddy Krueger terrorizes her in her dreams, all the while her parents and the authorities try to ignore her (for reasons that later become clear). Johnny Depp is also a joy to watch as Glen Lantz.

And then, of course, there’s Robert Englund in his first outing as Freddy Krueger. This is probably the only time we get to see a truly nightmarish version of Freddy, who was apparently inspired by a real man who used to stand outside a young Wes Craven’s bedroom window at night (shudder).

In second place is perhaps the weirdest entry in the entire franchise — Wes Craven’s New Nightmare (1994). In many ways, you could compare it to Halloween III: Season of the Witch (1982), seeing as it doesn’t take place in the same timeline as other movies in the series.

With that said, Wes Craven’s New Nightmare isn’t some anthology sequel that was created to kick-start an entire new set of movies. The 1994 film actually takes place outside the world of the A Nightmare on Elm Street movies, focusing on certain members of the cast and crew.

Heather Langenkamp gives her best performance in the series, and it’s just as fun to watch Robert Englund and Wes Craven play themselves. And despite being set in the “real world”, it’s a fitting trilogy-topper to Heather Langenkamp’s previous two entries.

Though the film’s “meta” commentary on our relationship with horror movies might have been too ahead of its time upon release (1996’s Scream became a far more accessible analysis on the genre), New Nightmare has, in the decades since, developed a cult following — and rightly so.

Many fans would argue that Wes Craven’s 1984 classic should be at the top spot, but there are probably just as many wouldn’t be confused by the fact that we consider A Nightmare on Elm Street Part 3: Dream Warriors to be the best film in the entire franchise.

A Nightmare on Elm Street Part 3: Dream Warriors follows “the last of the Elm Street children” on a psychiatric ward, where doctors believe they’re the victims of a mass hysteria. However, as we know, Freddy Krueger has them right where he wants them.

While subsequent installments see Freddy Krueger transformed into an unfunny joke, Dream Warriors strikes the perfect balance, giving us a Freddy who’s just as terrifying as he is in the original film, but who belts out memorable one-liners as he taunts his victims.

You could easily skip the second film altogether, and either end your A Nightmare on Elm Street experience with Dream Warriors, or even with New Nightmare, seeing as Heather Langenkamp returns to battle Freddy Krueger one last time in the latter film.

How would you rank all the A Nightmare on Elm Street movies? Let us know in the comments down below!