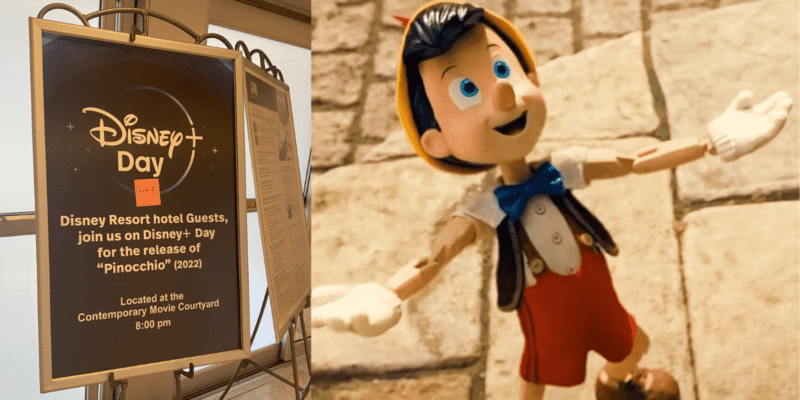 Many television shows and movies debuted on Disney+ for Disney+ Day, including the latest episode of She-Hulk: Attorney at Law, a film showcasing performances by K-pop sensations BTS, and the live-action Pinocchio (2022).

Disney’s Contemporary Resort decided to host an 8:00 p.m. premiere showing of Pinocchio for Guests at the Contemporary Movie Courtyard. But there was one problem… @MagicKing_ shared a photo of the sign on Twitter:

Just in time for Disney+ Day, which I would’ve never have known the date of if there was no sticky note!

New sign @derekburgan! Just in time for Disney+ Day, which I would’ve never have known the date of if there was no sticky note! pic.twitter.com/i9RFNVpKPO

Did you catch the error? While the sign explains that the movie screening will be on Disney+ Day, it doesn’t specify the event’s date. Disney Cast Members later added a small sticky note to the sign, “Sept. 8.”

Pinocchio is Disney’s latest live-action remake of a classic animated film. From Disney Plus:

Academy Award winner Robert Zemeckis directs this live action and CGI retelling of the beloved tale of a wooden puppet who embarks on a thrilling adventure to become a real boy. Tom Hanks stars as Geppetto, the woodcarver who builds and treats Pinocchio (Benjamin Evan Ainsworth) as if he were his real son. Joseph Gordon-Levitt is Jiminy Cricket, who serves as Pinocchio’s guide as well as his “conscience”; Academy Award nominee Cynthia Erivo is the Blue Fairy; Keegan-Michael Key is “Honest” John; Academy Award nominee Lorraine Bracco is Sofia the Seagull, a new character, and Luke Evans is The Coachman. Also in the cast are Kyanne Lamaya as Fabiana (and her marionette Sabina), Giuseppe Battiston as Stromboli and Lewin Lloyd as Lampwick.

Have you watched Pinocchio yet?