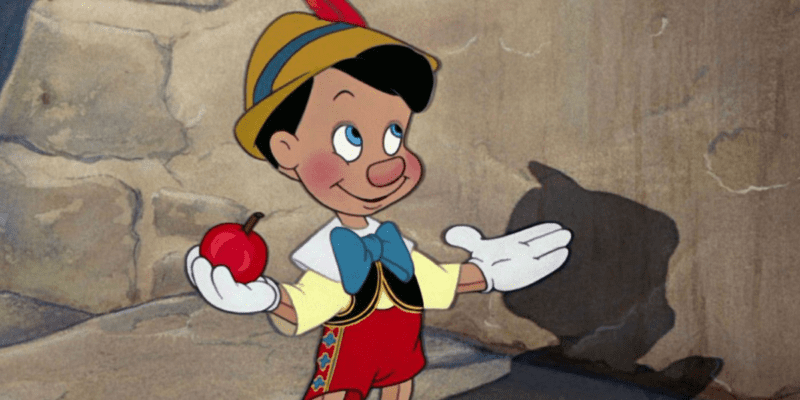 2022 is getting three separate Pinocchio films, but Disney has nothing to do with the version that’s turning the wooden boy into the “perfect soldier” amid a fascist-filled town.

Pinocchio from author Carlo Collodi is a tale as old as time and has been interpreted through countless mediums since its inception in 1883. The mischievous misadventures of a wooden marionette tantalized audiences with Walt Disney’s award-winning animated Pinocchio (1941), a movie that inspired Hollywood legend Guillermo del Toro.

In a turn of events, del Toro’s anticipated stop-motion animated Pinocchio picture is featuring the wooden boy in a fascist setting, being recruited by local authorities as the “perfect soldier”:

Guillermo del Toro’s ‘PINOCCHIO’ is set in Italy in the early 1900s during the rise of fascism.

With James the Giant Peach (1996) and Jojo Rabbit (2019) colliding into one movie, fans aren’t sure how they feel about a wooden boy becoming a soldier:

did NOT expect pinocchio to become a fascist..

did NOT expect pinocchio to become a fascist..

they sendin a walking broomstick into battle????

they sendin a walking broomstick into battle????

Nonetheless, del Toro affirms that his ambitious project is first and foremost a family film, one with hard-to-swallow themes that younger generations today need to grasp desperately:

“These are times that demand from kids a complexity that is tremendous. Far more daunting, I think, than when I was a child. Kids need answers and reassurances.… For me, this is for both children and adults that talk to each other. It tackles very deep ideas about what makes us human.”

“I’ve always been very intrigued by the links between Pinocchio and Frankenstein. They are both about a child that is thrown into the world. They are both created by a father who then expects them to figure out what’s good, what’s bad, the ethics, the morals, love, life, and essentials, on their own. I think that was, for me, childhood. You had to figure it out with your very limited experience.”

“All you need to be human is to really behave like one, you know? I have never believed that transformation [should] be demanded to gain love.”

In the first look with Vanity Fair, Guillermo del Toro shares all there is about his new take on the classic story:

Del Toro’s Pinocchio takes place not in a fairy-tale world, but in Italy between World War I and World War II, during the rise of fascism and authoritarian rule in the country. The wooden boy happens to come to life “in an environment in which citizens behave with obedient, almost puppet-like faithfulness,” del Toro says.

In Disney’s tale, as with most versions of the story, Pinocchio’s fortunes take a downward turn when he succumbs to his desires and vices and indulges in misbehavior. Del Toro wanted to shift perspective on that as well. “It’s counter to the book, because the book is seeking the domestication of the child’s spirit in a strange way,” the director says. “It’s a book full of great invention, but it’s also in favor of obeying your parents and being ‘a good boy’ and all that. This [movie] is about finding yourself, and finding your way in the world—not just obeying the commandments that are given to you, but figuring out when they are okay or not.”

The formally titled Guillermo del Toro’s Pinocchio aims to stand apart. For one thing, the production quality of his film is self-evident in the ornate detail of the sets and textures of the characters. And he has reinterpreted Collodi’s tale in a way that distances it from the formidable Disney adaptations. “I have been very vocal about my admiration and my great, great love for Disney all my life, but that is an impulse that actually makes me move away from that version,” del Toro says. “I think it is a pinnacle of Disney animation. It’s done in the most beautiful, hand-drawn 2D animation.”

By contrast, he notes that his own film is “a story about a puppet, with puppets—trying to seek acting from the animators in a different medium completely. We couldn’t be more different than any other version of Pinocchio in our spiritual or philosophical goals, or even the setting.”

Even Jiminy Cricket is getting a new name in this Netflix original, with Ewan McGregor voicing Sebastian J. Cricket:

Guillermo del Toro behind the scenes of his stop-motion animated ‘PINOCCHIO’ film.

Guillermo del Toro behind the scenes of his stop-motion animated ‘PINOCCHIO’ film.

To be clear, The Walt Disney Company and Disney Animation Studios have no connections or ties to the production and execution of Guillermo del Toro’s picture.

Guillermo del Toro’s Pinocchio is yet to receive an official release date, but Netflix currently states that the movie will hit the streaming service in December 2022.

Will you be watching this new Pinocchio movie? Comment below!