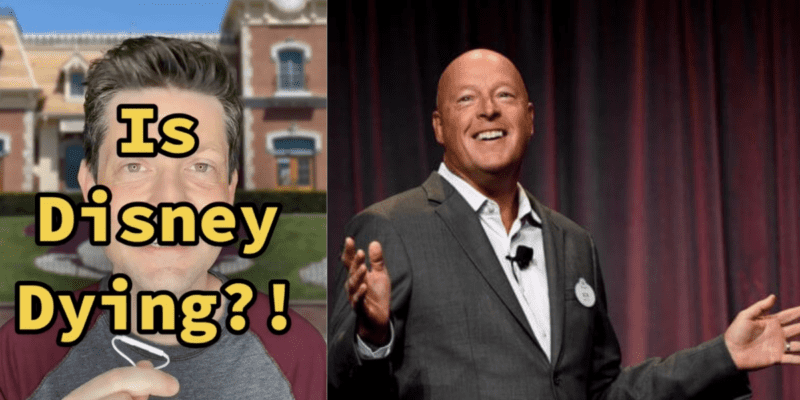 Last month, The Wall Street Journal reported that The Walt Disney Company is making more money than ever from the Disney Parks with fewer Guests than before the COVID-19 pandemic.

Despite a recent slow climb, Disney stock prices are at a 5-year low, according to The Motley Fool. Many fans wonder what the difference between profits and stock prices mean for the future of The Walt Disney Company. @sayheyjames shared his thoughts on TikTok:

What are your thoughts? Is Disney dying? I forgot to mention that “dynamic ticket pricing” for various days also has increased the amount of money earned by Disney. #isdisneydying #disney #disneyland #disneyworld #waltdisney50

James shared his thoughts on The Wall Street Journal article. “Ever since Bob Chapek became the head of The Walt Disney Company, or as he’s lovingly referred to by fans as ‘Bob Paycheck,’ people have noticed that things have changed in a not-so-positive light,” James said.

He noted that Disney has been able to keep Park attendance down and increase profits by trading out once-free services, like FastPass+, for paid services like Genie+ and Lightning Lane. Additionally, they’ve removed complimentary amenities like airport transportation via the Magical Express.

Additionally, after laying off tens of thousands of Cast Members due to COVID-19, the Disney Parks still haven’t hit pre-pandemic employee levels. James said Guests have noticed attractions breaking down more frequently and dirtier Parks, issues we’ve reported on extensively. He also mentioned Disney+ being a massive moneymaker for The Walt Disney Company, which will only continue when prices increase in December.

“An interesting factor in all of this, though, is the stock prices of the Disney company. While The Wall Street Journal has pointed out that allegedly the Disney Company is still increasing their profits, the stock price has fallen since this time last year, where it was trading at roughly $180 a share,” James explained. “Today, it’s trading at roughly $111 a share.”

“So when the question is asked, ‘is Disney dying?’ It’s kind of a yes and kind of a no,” James argued. “No, in the fact that the Disney Company is still making record profits. Money’s still coming in. People are still buying things and still showing up to the Parks. However, the quality of the experience is now becoming compromised in a lot of individuals’ eyes. Will this reflect more tanking of the stock price or actual stagnant growth within the company? Only time will tell. But as of right now, people are still willing to pay the price for Disney.”

Dozens of Disney fans spoke out in the comments section. “Thanks to Bob paycheck never before in the history of Disneyland have so many people been so disillusioned, dissatisfied, disappointed, & overcharged,” John Blackstock wrote.

A few Disney fans said they weren’t renewing their Disneyland Resort Magic Keys and Walt Disney World Resort annual passes. But many Guests said the Parks still feel as packed as they used to be.

“I do not represent Disney but I am a current cast member. We are as busy as can be without packing in the parks. It’s more comfortable for the guests…in turn allowing them to experience more, hence spend more,” Justin Bazzini said. “Also, rides “breaking down” are almost always because of Guests causing the problem.”

@josephinelcajon said the Disney Parks have gotten too expensive for their family. “[It’s] a rich only paradise. The rest of us have moved to Universal Studio and will not be going back.”

Do you think The Walt Disney Company is dying?