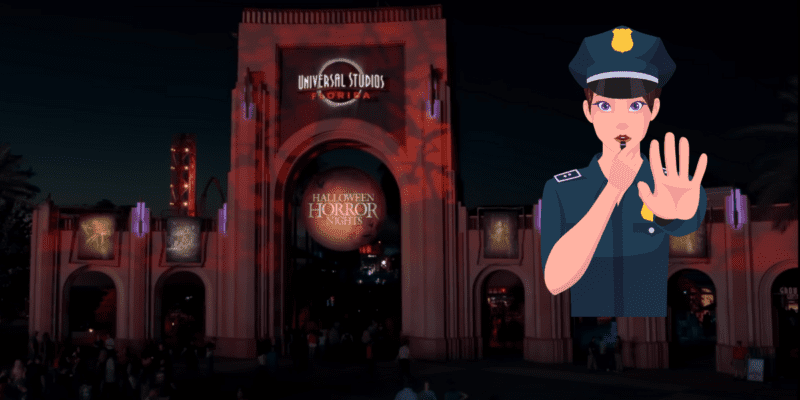 Fans look forward to the spooky Universal event every year with an entire fan community surrounding “HHN.” This week, that community came together on Reddit to discuss the increased police presence at Halloween Horror Nights.

“I went recently for the first time and was a little surprised at the sheer amount of police officers, they were literally everywhere, including 1-3 outside of every single haunted house,” Reddit user u/WanderWut wrote.

“It’s encouraged by the park for everyone to get as trashed as possible. Someone has to police it because you’re basically adding heat+dehydration+crowds+teenage dickheads+loads of alcohol+pre gaming+long queues and agitation together,” u/rageofreaper explained.

u/Mrswhittemore said that their family actually required police response at Halloween Horror Nights: “My mom is ghetto as hell and wasn’t mentally prepared for HHN: they jump scared her and she jumped back (didn’t actually swing on them but it was def intimidating) she got us thrown out lol this was in the first few minutes of being in the park.”

Another Universal Orlando Guest referenced a July fight that caused an active shooting scare at Universal CityWalk. No shots were fired, but the brawl resulted in a lockdown and police response. From u/Sea_Ostrich_294:

Around 11pm, we were eating at NBC grill in city walk when a lady came in the door screaming. Everyone start running (outside at city walk and inside) and it was a big frenzy. Multiple people says there was someone with a gun and shooting. All of us in NBC grill were escorted down to the underground tunnel and some of us were told to wait in one of the merchandise storage rooms. Eventually we were allowed to leave about 30 mins later. There were tons of cops, as you would imagine.

u/Xdonjuliox used to work at Universal Orlando Resort and said that he saw fights, breakups, Guests escorted out for inappropriate sexual conduct, and even a Guest brandishing a taser:

However, the former Team Member said that Rock the Universe, an annual Christian music event at Universal Orlando Resort, is much worse than Halloween Horror Nights.

Have you seen any wild Guest behavior at Halloween Horror Nights?