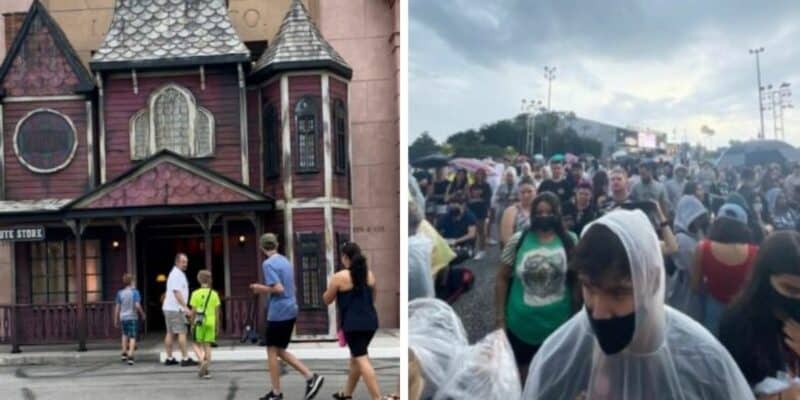 All images credit: Inside the Magic

As Halloween comes to a close this evening, Universal Orlando Resort theme park Guests have one more evening to experience Halloween Horror Nights.

Related: Fight Breaks Out Between Guests at Universal’s Halloween Event

Halloween Horror Nights has been the premier Halloween event that the theme park resort has had to offer for 30 years, taking place primarily at Universal Studios Florida, and at times, Islands of Adventure as well. After the COVID-19 pandemic shut down the even last year, Guests were thrilled to be able to experience the spooks this year once again. With Jack helming the show and many other classic HHN Icons making their return, the spooks have been amazing.

Guests have been able to enjoy five terrifying scare zones as well as amazing haunted houses. The classic Halloween film Beetlejuice came to life this year, as well as Netflix’s Haunting of Hill House. We also saw amazing original houses such as Wicked Growth and Puppet Theatre, to name a few. With ten haunted houses to enjoy, Guests had plenty of options to experience the thrill. But, it seems that the thrill may have been too strong for some.

In an online group, Jackson V. noted that he and his girlfriend attended the event this week when his girlfriend ended up passing out in the middle of a haunted house. Inside the Magic spoke with Jackson, who recalled the experience:

I wanted to take my girlfriend to HHN at least once this year. I have a frequent fear pass, but she didn’t have once since she is not a major horror fan. We just bought her a single day ticket and she was excited to go, even though she was also super scared. We got through Beetlejuice and she was freaking out, which had me laughing since its one of least scary houses, in my opinion.

She kept a brave face through some of the houses, but once we went into the Bride of Frankenstein, things took a turn for her. Nearly as we were about to finish the house, she ended up collapsing into me. I was able to catch her and she was concious in seconds so we were able to get out of the house without holding up the line for too long. She ended up going to the doctor the next day and everything seemed to be fine, we think that she was so anxious by that point in the night and a little dehyrated that it may have just been overwhelming for her.

As Jackson mentioned, his girlfriend is once again in perfect health but probably will be staying away from the spooks for a little while! It is important to remember that when you are at Halloween Horror Nights or Universal Orlando Resort in general, you can always as a Team Member for assistance as they can direct or bring you to First-Aid.

There are also Team Members in each Halloween Horror Nights house, but from the sounds of it, it seems that the collapse was brief enough that it did not trigger significant attention from the Guests around them.

Have you found the Halloween Horror Night houses to be terrifying this year? Let us know in the comments below.