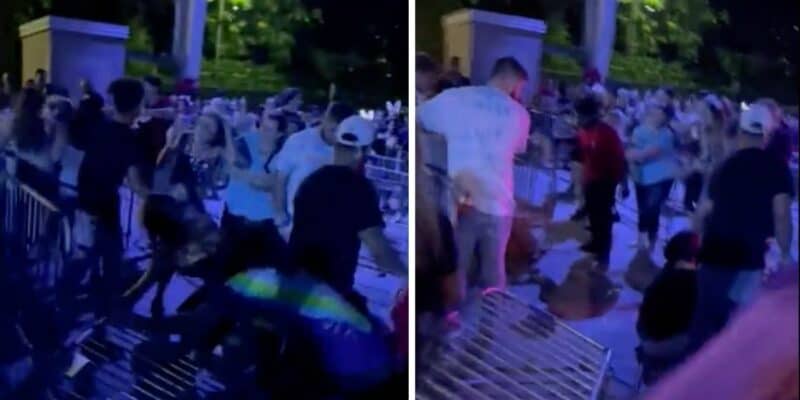 If you are a fan of Halloween and theme parks, you surely know of Halloween Horror Nights, Universal Orlando Resort’s yearly event.

This is the 30th year for the event, and after not having it last year due to the pandemic, Guests flocked back to get spooked. There are ten haunted houses, five scare zones, and a tonne of booths that offer delicious and exclusive treats and drinks for Guests. Typically, the event is filled with horror and fun, sending Guests’ heart rates racing, but it seems yesterday evening things got a little wild.

Wedderbum (@LWedderbum) tagged us in a Twitter post that showed a fight breaking out at Halloween Horror Nights yesterday evening. The fight happened in the queue for one of the houses and seemed to involve a large group of people.

Of course, since we were not there, we are not exactly sure what created the altercation, but the post had a few comments with explanations. We cannot guarantee that these are factual, but since some of these Guests were there, it can provide a better insight into what possibly happened.

I was there last night. The fight started because two guys were trying to physically restrain the line while thru bought beer. Tensions were high. After security let them rejoin the line and they cut back to their original place is when the fight broke out.

I was there last night. The fight started because two guys were trying to physically restrain the line while thru bought beer. Tensions were high. After security let them rejoin the line and they cut back to their original place is when the fight broke out.

RJ (@RJ_TESLA) seemed to have the same story after being there as well:

We can see that not even a minute into the fight, Universal security was on the scene making sure that the fighting came to an end, and was escorting some Guests out of the queue area. Instances like this are not common at Halloween Horror Nights and truly could happen anywhere, as the argument was clearly between people and not about the event itself.

Have you attended Halloween Horror Nights as of yet? Let us know in the comments below!