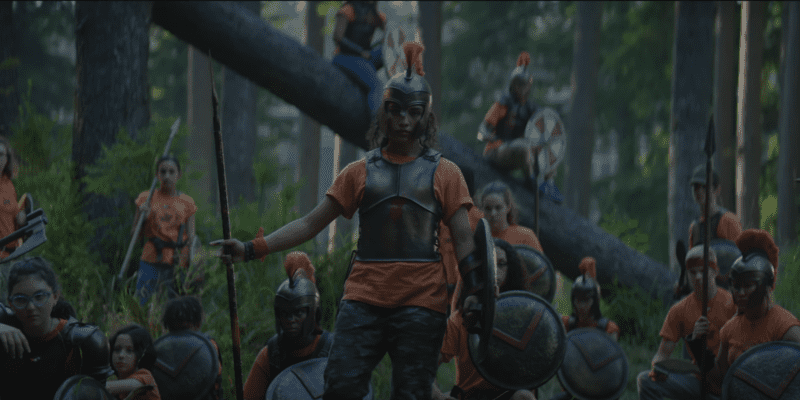 During this year’s Disney D23 Expo, fans have been delighted with some of the most anticipated updates on projects from their favorite studios being officially announced. From a first look at the latest Marvel and Star Wars projects to full trailers for some of the most anticipated sequels, including Hocus Pocus 2 and Disenchanted, both of which are coming to Disney+ later this year.

As part of these exciting announcements, the first teaser trailer for the upcoming Disney+ Original Percy Jackson and the Olympians was revealed. You can see the teaser below or click here to watch it.

The teaser provides a first look at Camp Half-Blood. While not much action is shown in this initial look at the upcoming series, nor much detail is shared on the approach this project will take on the book series from author Rick Riordan, the ominous narration we hear promises that this series will be packed with action and adventure.

Look, I didn’t want to be a Half-Blood. Being a Half-Blood is dangerous. It’s scary. Most of the time, it gets you killed. If you think you might be one of us, my advice is turn away while you still can. Believe whatever lie your mom or dad told you about your birth and try to live a normal life. Because once you know what you are, they’ll sense it too, and they’ll come for you. Don’t say I didn’t warn you.

The series will use ILM’s technology, similar to the one used in The Mandalorian, another popular Disney+ Original series. Percy Jackson and the Olympians will be the first project to be developed on Industrial Light & Magic’s newly built StageCraft LED stage, featuring a 95-foot LED screen that allows the production to transport actors — and viewers — to the most fantastic locations through the use of different virtual tools that also allow the use of practical set pieces, giving productions a breathtaking and highly realistic visual opportunity.

Industrial Light & Magic is a division of Lucasfilm that has set the standard for visual effects since 1975 when George Lucas founded the division. ILM has created visual effects for over 350 feature films, with some of the most stunning images in the history of cinema, and continues to break new ground in the field not only in visual effects but now with virtual reality, augmented reality, immersive entertainment, and virtual production.

Currently, there is still no official release date for this Disney+ Original. Inside the Magic will update you as more information is released on Percy Jackson and the Olympians.

Are you looking forward to entering the world of Percy Jackson on Disney+? Let us know in the comments down below!