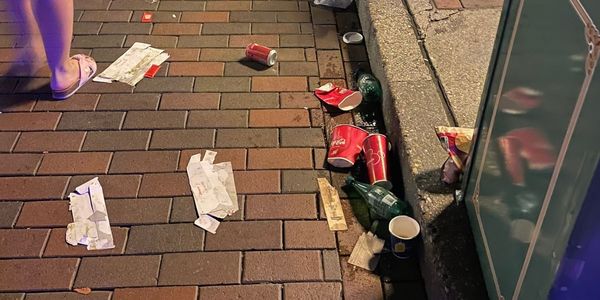 Due to the sheer amount of Guests that visit the Disney Parks and Resorts each day, it’s safe to say that there will always be lots of trash to pick up. Here’s where the amazing Cast Members come in.

Cast Members are often the unsung heroes of the Disney Parks experience, cleaning, cooking, helping, and taking care of Guests and the Parks themselves.

However, Cast Members are just people and sometimes struggle to keep up with the large crowds that are filling the Parks currently.

Disneyland Paris is somewhat notorious for its Guests taking liberties in the Park and across the Resort. Recently, one Guest even brought their own pillow to lay down with at the Park. We also reported on Guests tearing down water hoses at the Park, which were put in place to help combat the previously mentioned high temperatures.

Another issue popped up at the European Resort, and this time it had to do with trash.

Apparently, the Park has been facing issues with Guests littering, with trash thrown everywhere except for inside actual trash cans. This was shown in a tweet from Disneyland Paris bons plans (@Disneylandpbp) which is linked below:

Some Guests leave their trash on the floor after the Disney Illuminations night show. Congratulations to the Cast Members of the cleanliness team present to clean everything!

Disney Pak Fans España (@DisneyParksEs) responded to this tweet with a video of the trash inside the Park:

As you can see, trash was everywhere. It is extremely un-Disney-like to see trash covering the floors and public walkways like this, as Disney is often revered for its cleanliness. However, we are sure Cast Members swooped in to take care of these issues quickly.

Have you been to Disneyland Paris before?