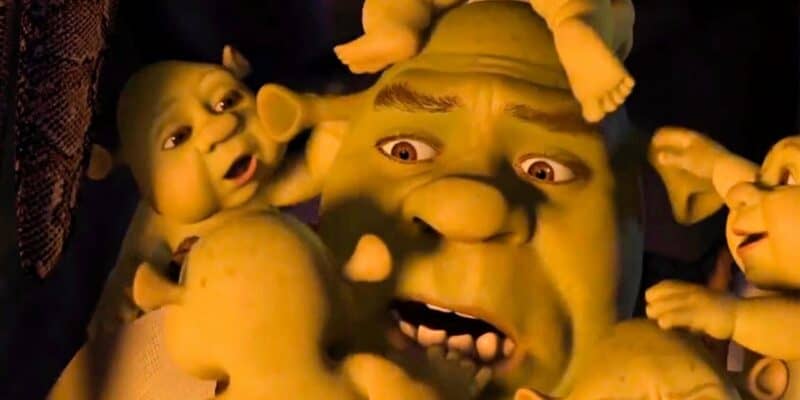 “Somebody once told me the world was gonna roll me, I ain’t the sharpest tool in the shed”, is the iconic first line that drops at the beginning of Shrek (2001), and the start of one of the soundtracks that defined the early 2000s.

Go on, kick back and jam out to Smash Mouth’s seminal ’00s classic, All-Star — you know you want to:

The Shrek series of movies have been icons ever since the first film debuted in 2001. Starring Mike Myers in the titular role of Shrek the Ogre, Shrek the film came to almost define DreamWorks Animation as a studio and cement the burgeoning company in the minds of the public.

Long ago, in a “Magic Kingdom” far, far away, an executive by the name of Jeffrey Katzenberg was upset after being passed on for the role of Chief Operating Officer by one Disney CEO, Michael Eisner. Katzenberg then departed the magical kingdom known as The Walt Disney Company. Joining forces with famous director Stephen Spielberg and music executive David Geffen, the animation studio known as DreamWorks SKG (their initials) was born.

Producing several iconic films such as The Prince of Egypt (1998), The Road to El Dorado (2000), and film franchises like Kung Fu Panda, Madagascar and How To Train Your Dragon, DreamWorks has remained a staple and firm competitor of Disney ever since.
But still quite key to the foundation of the studio? Sweet, sweet revenge.

Why was Shrek such a big deal?

Related: Mike Myers Wants More ‘Shrek’, Would Be “Thrilled” For Another Film

The first Shrek movie start kickstarted almost a decade of films and characters within the Shrek world and franchise — with some instalments being beloved cult classics and others… less so.

Standing in almost fierce opposition to The Walt Disney Company and their specific style of fairytale-driven, family-friendly entertainment, the Shrek movies specifically began as a clear pastiche of “classic princess fairytales” of the Disney bent, before evolving and developing into their own unique fantasy world.

Coupling “adult” humor and pop culture references with direct parodies of Disney and fairytale classics, Shrek attempted (and in some cases, rather successfully achieved) a particular brand of self-aware comedy suited for all ages. Not to mention, its no-holds-barred insanity lent itself beautifully to getting permanently installed into the halls of internet meme history.

Now, let’s peel open the layers of the large, juicy onion that is the Shrek series of films! This is all Shrek movies ranked.

Ranking all the Shrek movies from worst to best

Last (and first) on the list is the penultimate Shrek movie, Shrek The Third. Following disappointingly from the significantly better Shrek 2 three years prior, the third Shrek film concerns a confusing plot surrounding the… weirdly “froggy” death of King Harold (John Cleese) of Far Far Away, leading Shrek (Mike Myers) to go on a strange quest to find an heir to the throne in King Arthur, or Arthur “Artie” Pendragon (Justin Timberlake) as he fears the responsibility of becoming a King himself. Shirking responsibilities is the entire conceit of the movie, basically.

Shrek sets out on his quest with Donkey (Eddie Murphy) in a very protracted “medieval high school” segment with a teenaged Artie, while Princess Fiona is left home with mother Queen Lilian (Julie Andrews) to grapple with the Big Bad of this movie, returning Prince Charming (Rupert Everett).

There is also an underlying issue plaguing our Big Green Guy — with an equally odd premise and uncomfortably depicted Shrek-babies. Yes, this movie concerns Shrek’s very visually disturbing fears of becoming an ogre-daddy to his and Fiona’s likely entirely ogre-kin. Legitimately, there are some seriously unsettling sequences in this film — you have been warned.

Its general incoherency and somewhat boring plot, alongside a not-as-well utilized villain in Prince Charming relegates this Shrek film to last place in the list!

Third place goes to the most recent of the films in the Shrek franchise, Shrek Forever After, with a time-turning-twist posing a threat to our main ogres.

In a flashback, it’s revealed that the fairytale character Rumpelstiltskin or “Rumpel” (Walt Dohrn) was about to sign a contract with the King and Queen of the Kingdom of Far Far Away (established in the second Shrek) to lift the curse on their daughter — with the deal not going through because Princess Fiona (Cameron Diaz) had just then gotten rescued by Shrek from her heavily guarded castle.

The last tale in the Shrek franchise deals with Rumpel as the villain of the film, engaging in a plot that seeks to erase the current state of the Shrek world — as Rumpel tricks Shrek à la Sea Witch Ursula from The Little Mermaid (1989) or Doctor Facilier from Princess and the Frog (2009) — into signing a manipulative contract.

Shrek has to meet a “warrior” type iteration of wife Princess Fiona, and fight for the original life that he took for granted — eventually realizing that he didn’t know what he missed.

And SPOILERS — Shrek kind of “dies”? There is indeed an emotional Shrek death scene.

Ah, the first ever Shrek.

An icon that will surely stand the test of time, Shrek and the world it introduced audiences to, as well as the music — holds an eternally-2000s aesthetic that is entirely working for it.

Shrek was a clever satire of Disney and its brand of movies, throwing in Eddie Murphy’s Donkey to act as a superb foil to Shrek. With the film bragging everything from a buddy road-trip flick, to a fairytale fantasy, to a rom-com, Shrek attempts and does it all.

Lord Farquaad (who is allegedly meant to mirror Michael Eisner in some ways) is played expertly by John Lithgow, who delivers a gorgeously evil-yet-practical villain with a severe Napoleon complex. Audiences are also introduced to the colorful cast of characters in Pinocchio, the Three Little Pigs (both/all Cody Cameron), the Gingerbread Man (Conrad Vernon) and the Three Blind Mice (played by Mike Myers and Simon J. Smith).

Overall, it’s a phenomenal first foray into this new world, with the growing romance between unconventional Shrek and Princess Fiona with a “liar revealed” plot that isn’t annoying, greatly unique animation, a bumping soundtrack that blends 2000s hits with surprisingly emotional gravitas, and a multitude of iconic scenes and meme fodder.

This movie is the perfect sequel.

There, I said it! It’s better than the first Shrek. Shrek 2 delves into the characters in a way that’s sorely needed beyond their more trope-heavy portrayals in the first movie, and it effectively expands on the Shrek lore and fantasy world. Also? We’re looking at an almost perfect villain in the Fairy Godmother (Jennifer Saunders) and bumbling and vain himbo son, Prince Charming.

Fiona coming from a Hollywood-inspired Kingdom called “Far Far Away”? Her parents, actually the living “happy ending” of The Frog Prince fairytale, the hilarity that ensues with mistaken identities and Shrek and Donkey feeling “less” and turning into “good looking” versions of themselves, the mass-market nature of the Fairy Godmother’s empire? All of it is a stroke of genius. Saunders gives a stellar performance as the villain, with a backstory that actually fits into and fleshes out the lore of the Shrek world and characters and cleverly subverts expectations at every twist and turn of this brilliantly written film.

The direct Disney jokes in this don’t feel as… mean-spirited as the original (no Duloc-AKA-Disney theme park jibes, no Eisner jabs, etc), focusing a lot more on the world as a vehicle for funny bits and genre jokes that actually further the story — rather than using it as a chance to simply put down Disney execs. Not that it isn’t hilarious when they do it effectively!

Overall the Shrek franchise will forever after remain a symbol of the DreamWorks Animation Studios and the period in which it was made.

But this is not “The End” — in fact, it’s entirely likely that audiences will see a fifth Shrek film — but this time it could be a reboot of the franchise.

Do you agree with this ranking of all four Shrek movies? Share your thoughts in the comments below!