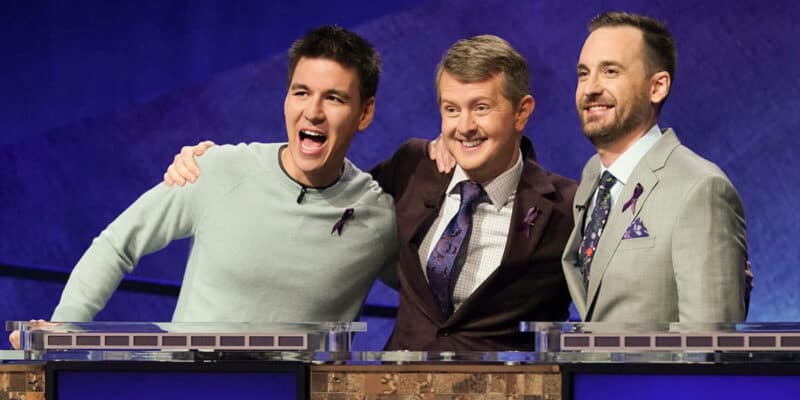 Now, amid recent confirmation that Bialik and fan-favorite Ken Jennings will share hosting duties for the foreseeable future, some popular champions have reunited for a “secret” Jeopardy tournament — for a good cause!

According to an article about the Las Vegas trivia charity event hosted by Project 150:

The multi-round, trivia-teeming weekend, which was not recorded, began with a hoard of “gameshow hopefuls who wanted a shot at Jeopardy! or The Chase,” Kelli shared.

16 attendees were “selected based on scoring of the pre-test they took” and “took on each other,” and if they won that, “then they took on the ‘titans.'”

The two audience members who won then played against the champs, including Season 38’s 40-game winner Amy Schneider and 38-game winner Matt Amodio – who are about to compete in fall’s winner’s tournament – as well as James [Holzhauer], Brad Rutter, and more.

The five-versus-five final portion was hosted by the beloved alum Buzzy Cohen and it was won by alum Jason Zuffranieri.

Although Jennings wasn’t present, Holzhauer made sure he was still included in the festivities by throwing a little shade his good friend’s way. The professional sports bettor said the “Jeopardy GOATs” are “Brad Rutter and himself ‘and a guy who’s not here [Jennings] but sent a video.'”

Did you know about this under-the-radar Las Vegas Jeopardy affair?