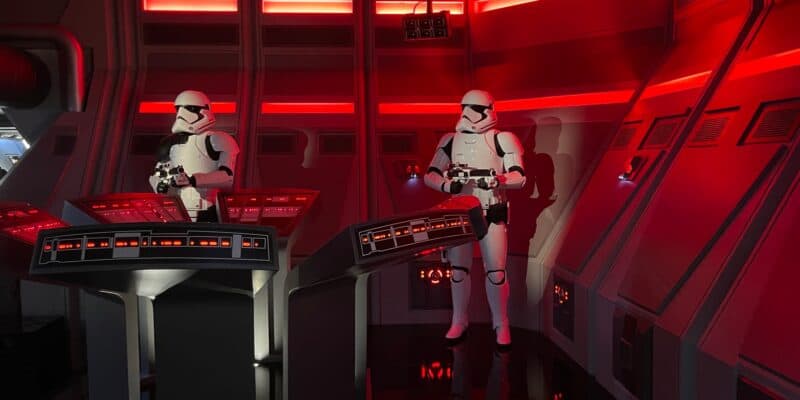 One Guest recently shocked social media by posting a never-before-seen video aboard Star Wars: Rise of the Resistance.

Disneyland Resort and Walt Disney World Resort have some of the most popular attractions in the world. From timeless classics like Peter Pan’s Flight, The Haunted Mansion, Pirates of the Caribbean, “it’s a small world,” and Dumbo the Flying Elephant, to new innovative experiences like WEB SLINGERS: A Spider-Man Adventure, Guardians of the Galaxy: Cosmic Rewind, and Star Wars: Rise of the Resistance. While there are hundreds of videos online taken by countless Guests riding these attractions, a recent never-before-seen video took social media by surprise.

The video was taken while riding Star Wars: Rise of the Resistance, and while it is not clear if it was taken at Disneyland Resort or Disney’s Hollywood Studios in Walt Disney World Resort, it has received almost a million views, 246.4K likes and over a thousand comments since it was posted yesterday.

In the video, Guests are taken aback after seeing two Stormtroopers smooching in the cockpit of an AT-AT, and we can even hear a Guest screaming, “They’re kissing!” as the vehicle moves away from the romantic scene.

This sudden change in the attraction seems too bold and sudden to be true, and that is because it isn’t. Peter France (@peterjfrance), the user who posted the video on TikTok, happens to be an artist who describes his account as “Some kinda 3D art type situation,” meaning he has skills in animation and video editing, which is the case with this hilarious scene.

The video quickly gathered some hilarious reactions, like the one from @imakethangs, who commented:

Finally a trooper who shoots their shot and hits the target!

I DONT REMEMBER THIS PART OF THE RIDE

Please tell me is this real!?!?

Sadly for Macie and all the viewers of this video, the scene was simply the result of impressive audio and video editing skills and an artist’s creative mind.

The video was also shared on Twitter by jess (@paradeofdreams), who comments she screeched when she first saw it, later adding that “these rise edits take me OUT.”

the way I just screeched

the way I just screeched pic.twitter.com/lUy8JC4Ozc

On Twitter, user @colesinglerr responded to the video, commenting, “GAY RIGHTS,” and @nerdfighterliv added, “I love the b show!”

We recently saw a similar incident happen at Pirates of the Caribbean, where a Guest convinced everyone that he had exited the attraction’s boat and was walking around one of the scenes. You can read more about that story here.

The official Disneyland website — which excludes the scene pictured above, of course — describes Star Wars: Rise of the Resistance as follows:

Have you experienced Star Wars: Rise of the Resistance during your visit to Disneyland Resort or Walt Disney World Resort? Let us know in the comments below!

Comments Off on Guest Shocks Social Media With Unseen Video Aboard ‘Star Wars’: Rise of the Resistance