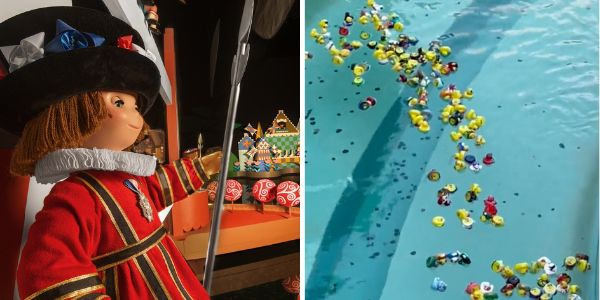 One of the most unique celebrations recently happened, involving Cast Members and rubber duckies.

The annual rubber duck race is a fun event that allows Cast Members to show off their creativity while also supporting a good cause. Disney Parks Blog shared some fun information about the fun race that takes place at the “it’s a small world” attraction in Disneyland:

“Beginning in 2008, the duck races were initially limited to attractions cast members from “it’s a small world.” In 2011, Tamarah was one of many who helped expand the event resort wide and ever since then, it’s been a cast member favorite. Proceeds from the annual event have been donated to numerous nonprofits including Toys For Tots, Make-a-Wish and this year’s charity, Goodwill Orange County. The popular Disneyland Resort tradition has even been adopted by Disney Cruise Line.

From bedazzled beaks to hand-painted feathers, cast members duckorated their rubber ducks according to various categories; including “Most like Donald Duck,” “Most Disney Themed,” “Favorite Attraction,” “Superhero” and “Least Sea-Worthy.””

You can check out a YouTube video of this year’s event below:

“The fact that cast members get to take a little yellow duck and let their creativity loose — it always blows my mind,” says Fantasyland Retail Manager Tamarah Mack. “The ducks let them express that creativity.”

Have you seen this event before?