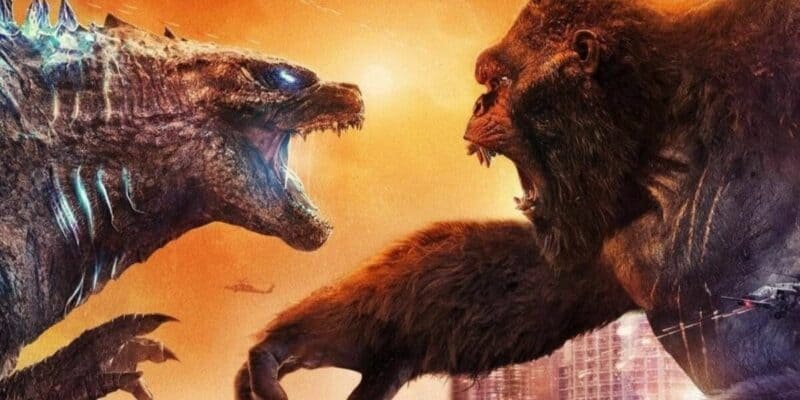 It might be a while before Godzilla vs. Kong 2 (2024) comes crashing into theaters, but we have some solid news that will whet your appetite for the upcoming sequel to the box office monster hit Godzilla vs. Kong (2021), which grossed over $470 million worldwide.

With director Adam Wingard back in the director’s chair, Godzilla vs. Kong 2 follows on from Godzilla (2014), Kong: Skull Island (2017), and Godzilla: King of the Monsters (2019), while of course serving as a direct sequel to the 2021 crossover sequel Godzilla vs. Kong.

There have been a few sneak-peaks in the news lately, from some footage on Australia’s Gold Coast where the film is currently shooting, to the casting announcement of Beauty and the Beast‘s Dan Stevens in the lead role. But now Legendary has revealed the official cast and synopsis.

Despite being gift-wrapped as a “versus” movie, the 2021 film sees Godzilla and Kong ultimately team up to take on the “Mechagodzilla” in Hong Kong. And it looks like the 2024 sequel is set to continue the titular Titans’ “bromance”, as they will both team up against another threat:

“This latest entry follows up the explosive showdown of Godzilla vs. Kong with an all-new cinematic adventure, pitting the almighty Kong and the fearsome Godzilla against a colossal undiscovered threat hidden within our world, challenging their very existence — and our own. The epic new film will delve further into the histories of these Titans, their origins, and the mysteries of Skull Island and beyond, while uncovering the mythic battle that helped forge these extraordinary beings and tied them to humankind forever.”

It has been confirmed that returning cast members are Rebecca Hall, Brian Tyree Henry, and Kaylee Hottle, who will be reprising their roles as Dr. Ilene Andrews, Bernie Hayes, and Jia.

However, there is currently no word on whether Alexander Skarsgard, Millie Bobby Brown, Shun Oguri, Kyle Chandler, and Julian Dennison will be reprising their roles as Dr. Nathan Lind, Madison Russell, Ren Serizawa, Dr. Mark Russell, and Josh Valentine, respectively.

Newcomers have been confirmed as Fala Chen, Alex Ferns, Rachel House, and Dan Stevens, all of whom have been cast in undisclosed roles.

Elsewhere in the MonsterVerse, Hollywood legend Kurt Russell and his son Wyatt Russell were previously cast in the upcoming live-action Godzilla TV series, which will follow on from the 2014 film, which stars Marvel Cinematic Universe siblings Elizabeth Olsen (Elle Brody) and Aaron Taylor Johnson (Ford Brody).

Here is the synopsis for the show, which will debut on Apple TV+:

“Following the thunderous battle between Godzilla and the Titans that levelled San Francisco and the shocking new reality that monsters are real. The untitled series will explore one family’s journey to uncover its buried secrets and a legacy linking them to the secret organization known as Monarch.”

Netflix will also soon be streaming an anime series titled Skull Island (TBA), which will follow on canonically from Kong: Skull Island. Recently, it was also confirmed that a live-action King Kong series is heading for Disney+, though it will not be related to Legendary’s MonsterVerse.

Godzilla vs. Kong 2 will be released in theaters on March 15, 2024. It is not yet known whether the film will be simultaneously released onto HBO Max like its predecessor, which was due to the COVID-19 pandemic.

Are you excited for Godzilla vs. Kong 2? Let us know in the comments down below!