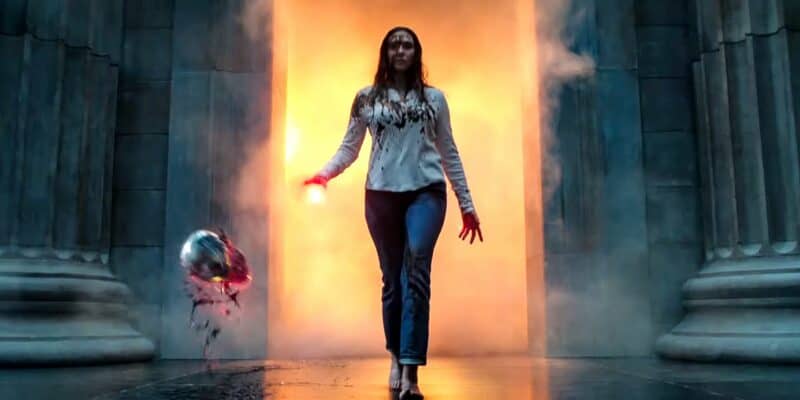 Marvel Cinematic Universe star, Elizabeth Olsen, refused to watch Doctor Strange in the Multiverse of Madness (2022), and has still not seen the latest movie from Marvel Studios.

Doctor Strange in the Multiverse of Madness from director Sam Raimi and writer Michael Waldron has almost topped $1 billion at the global box office. The natural successor to Tom Holland’s (Peter Parker/Spider-Man) Spider-Man: No Way Home (2021) sees Benedict Cumberbatch back as the Master of the Mystic Arts and former Sorcerer Supreme, Dr. Stephen Strange AKA Doctor Strange.

Like Cumberbatch, Olsen has been a mainstay for the MCU for years, and the epic conclusion of Marvel Phase Three’s Infinity Saga saw Wanda Maximoff kill her love, Vision (Paul Bettany) in Avengers: Infinity War (2018) and take on Thanos (Josh Brolin) in Avengers: Endgame (2019). Two years later, WandaVision would document her grief inside the town of Westview.

Despite her longevity, and the number of movies she has starred in for Marvel alone, the actress has not yet seen Doctor Strange in the Multiverse of Madness. Speaking on The Tonight Show (via Variety) the actress said:

“I’m not one of those [actors who doesn’t watch her own movies] […] I’m one of those people who likes to study something so I can figure out how to make it better. But I had a cold when we had the premiere and I didn’t want to sit through it. And so I asked them to send a copy so I could watch it, and it had my name on it and it had the time that I was watching it, and I didn’t want to watch it like that.”

Olsen commented that the watermarked screener she had received from The Walt Disney Company was distracting, leaving her unable to view it. The article notes:

“My name was on it and the exact time and date,” Olsen added. “It’s just distracting.”

“The Tonight Show” host Jimmy Fallon explained that Marvel screeners have watermarks on them “in case you sell it illegally,’ to Which Olsen responded, “How do you even do that? Who do you even send it to? How do you even record it on a  computer?”

While the Scarlet Witch actress may not have seen the finished version of Raimi’s Doctor Strange in the Multiverse of Madness, millions of others surely have. The Doctor Strange sequel may not have fared, at least universally, as well as Spider-Man: No Way Home, it did bring in something new to the ever-expanding Marvel Cinematic Multiverse.

From the Illuminati’s existence on Earth-838, with members like Captain Carter (Hayley Atwell), Captain Marvel (Lashana Lynch), Reed Richards (John Krasinski), and Professor Charles Xavier/Professor X (Patrick Stewart), to the addition of potential Young Avenger America Chavez, Multiverse of Madness allowed Marvel to play deeper with the rules of the Multiverse. The post-credits sequence involving a surprise Charlize Theron as Clea also teases what is to come in the world of Doctor Strange, especially for Marvel Comics fans.

As for Olsen, the Doctor Strange sequel left her story open-ended. While she did go down with Mount Wundagore after destroying the Darkhold, this is likely not the end of the established MCU actress. Chances to appear in Marvel Phase Five are many, and then there is the actress’s popularity, which Marvel would be reckless to underuse. Her next appearance could lie in the WandaVision spinoff series, Agatha: House of Harkness, which sees fan-favorite Kathryn Hahn return as the evil sorceress, but again, The Walt Disney Company nor Marvel Studios have confirmed Olsen’s involvement.

Hopefully, the Wanda Maximoff star will get to see her (probable) billion-dollar movie sometime in the near future.

Did you enjoy Doctor Strange in the Multiverse of Madness? Let us know in the comments down below!