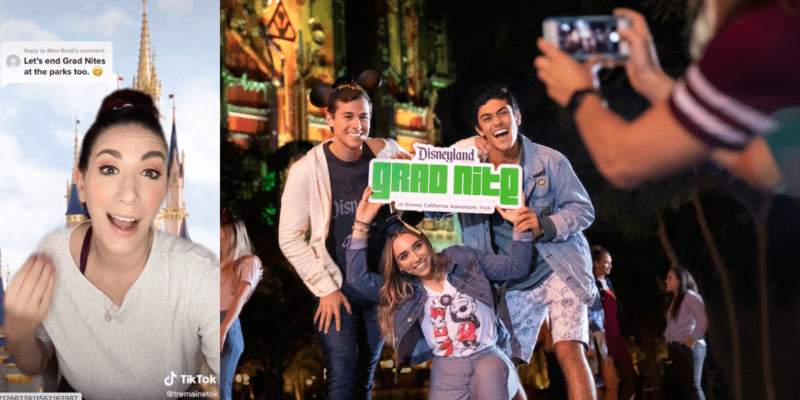 However, a former Walt Disney World Resort Cast Member, @TremaineTok on TikTok, is calling for an end to these events due to poor Guest behavior. Other Guests have also complained of “vulgar, racist” behavior at Disneyland Grad Nite and referred to the teen Guests as “unruly.” But the former Cast Member alleges it’s much worse than that:

The former Cast Member says employees spend 60-70% of their time during these events preventing teenagers and adults from “making magic,” a euphemism for sexual or inappropriate activity at the Parks.

“They are also the number one and number two nights for theft,” she explains. “It has insanely high rates of teenagers and even adults going into gift shops and just taking stuff and walking out. Now, the fact that this happens during a Christian event is hilarious to me.”

@TremaineTok says, especially at Grad Nite and Grad Bash, kids don’t think they’ll be held accountable. However, she claims that entire high schools have been banned from Walt Disney World Resort and Universal Orlando Resort due to the behavior of one person.

“They do not bring enough chaperones. Now, I don’t remember what the minimum ratio of chaperone to student is, but it’s not enough,” she claims. “And also, the students don’t have to stay in one large group. They can wander around with their individual groups of friends, which means that the chaperones really can’t do anything.”

“They need to end Grad Nites and Grad Bash and Night of Joy while we’re at it,” @TremaineTok says. In the comments, she clarifies that while Night of Joy and Grad Nite at Walt Disney World Resort ended in 2011, Universal Orlando Resort and Disneyland Resort should follow suit by banning Grad Nite and Rock the Universe.

@ninigirl955 works at Universal Orlando Resort and agrees with @TremaineTok. “As a team member, GradBash/GradVenture (middle schooler) and Rock the Universe are probably the worst shifts I’ve worked,” she wrote.

Do you think graduation parties and religious events should be banned at the Disney Parks and Universal Orlando Resort?