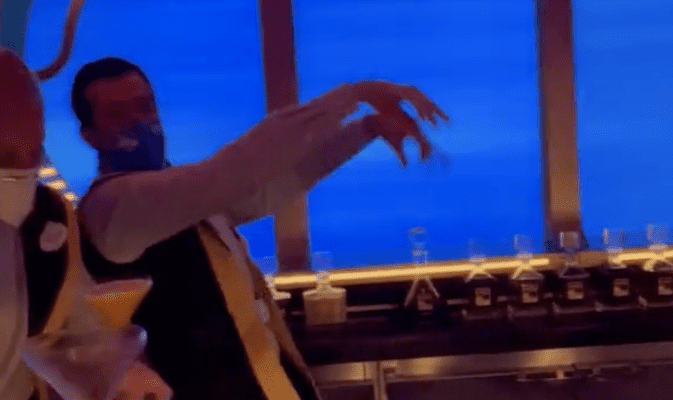 “The force was not with this Star Wars bar,” wrote Disney content creators The Lost Bros.

The trio of friends is referring to a new lounge located aboard Disney Cruise Line’s newest fleet member, the Disney Wish.

The ship’s maiden voyage took place in June of 2022 and introduced a long list of new experiences for Guests seeking to explore the “castle on the sea,” as it is so aptly called by portfolio creative executive for Walt Disney Imagineering Laura Cabo.

One of those experiences is AquaMouse, Disney’s first-ever attraction at sea. The family-friendly ride features “760 feet of winding tubes suspended high above the upper decks,” according to a report by Disney Parks Blog. The tubes even make their way over the open ocean briefly, as Guests have shared in various social media posts.

Another brand new offering that can be found on board the ship is Arendelle: A Frozen Dining Adventure, complete with food, characters, entertainment, and even crafts, all honoring Disney’s Frozen (2013) and Frozen II (2019.)

But the new offering currently under The Lost Bros’ microscope is Star Wars: Hyperspace Lounge, and they took to social media to share their “honest review.”

“Time for the unfortunate truth about Hyperspace Lounge on the Disney Wish because I feel like no one is talking about it,” the video narrator said while entering the lounge.

He prefaced the review by calling the Disney Wish one of the “best things ever,” claiming that every detail on the ship is a “massive feat of human creativity.”

That is, except Hyperspace Lounge, which the narrator called “incredibly underwhelming” at best.

The TikToker shared that while the 4k quality video window and knowledgeable bartenders lent themselves to the desired vibe, there was nothing else notable about the experience.

“My beef really comes down to the extremely plain setting of the room,” the narrator said. “It’s all white walls, and it felt like a second-grade science classroom.”

He concluded that anyone who has been to Oga’s Cantina at either Star Wars: Galaxy’s Edge locations would find the new Star Wars: Hyperspace Lounge lacking in immersion.

One commenter equated the visual to an airport lounge.

“We appreciate an honest review and I think you’re spot on from what I’ve seen,” another commenter added.

Another follower claimed that EPCOT’s Space 220 did it better with its table-service dining experience that serves a “celestial panorama from a space station,” per Disney’s website.

Gather your crew and prepare to transport to the legendary destinations of the Republic, Empire and First Order.

While relaxing over refreshing galactic concoctions, experience hyperspace jumps to several planets in the Star Wars universe to take in the epic views—ranging from serene vistas to action-packed encounters.

The spectacles seen through the viewport—a widescreen “window” to the stars—also feature iconic spaceships and fan-favorite locales such as Tatooine and Coruscant from the original Star Wars trilogy. Surround-sound audio and holographic models of nearby ships further enhance this otherworldly experience.

What do you think of the new Star Wars: Hyperspace Lounge? Worth the hype or “incredibly underwhelming”? Tell us in the comments below.