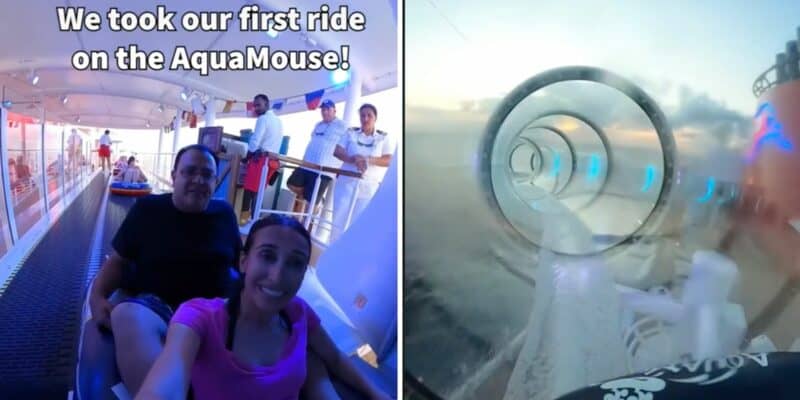 Guests filmed their first ride on Disney’s first ever attraction at sea, and the views are “amazing.”

The journey will begin when you board a two-seater ride vehicles and ascend into a magical tunnel that will teleport you into the cartoon world of “Scuba Scramble,” a new animated short that plays out through oversized virtual portholes. Along the way, you’ll encounter curious sea creatures, familiar Disney friends and more than 60 water effects that bring the subaquatic hijinks to life – all perfectly synched to an original musical score by Emmy-nominated composer Christopher Willis (“The Wonderful World of Mickey Mouse”).

At the height of the show, you’ll blast out of the tunnel and embark on a wild water ride around the upper decks. First, you’ll zip into the forward funnel through an enclosed tube surrounded by dazzling lighting effects, followed by a quick dash through a dark tunnel that opens up to reveal breathtaking views of the ocean.

You’ll then jet up and down a series of speed blasters as they are propelled toward the grand finale: a soaring loop over the edge of the ship, with clear views down to the deep blue sea. With that, you’ll splash down for a sendoff message from Mickey and Minnie – another successful tour in the books!

Related: Behind the Scenes of Disney’s Newest Attraction, The AquaMouse

When they reach the top of Disney’s first “attraction at sea”, the riders are launched into a see-through waterslide that at one point, extends out over the open water. The footage shows the ride slowing to a stop atop the ship shortly after.

AquaMouse is located on the Disney Wish. With its maiden voyage taking place on July 14 of this year, the newest fleet member is described by Disney Cruise Line as a “Wish” come true, “where fantastical worlds and beloved stories from Disney, Marvel, Star Wars and Pixar are brought to life like never before.”

AquaMouse itself takes cues from the animation style used on Walt Disney World Resort’s popular ride, Mickey and Minnie’s Runaway Railway. The ride will also be added at Disneyland Resort as part of its upcoming Toontown renovation.

Are you planning a cruise aboard the Disney Wish? Will you be riding AquaMouse? Comment below!