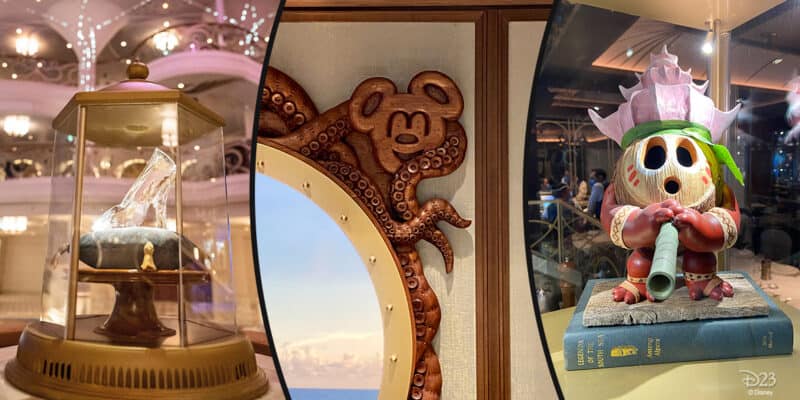 In a recent podcast episode of D23’s “Inside Disney,” portfolio creative executive for Walt Disney Imagineering Laura Cabo shared some of her favorite details about Disney Cruise Line’s newest ship, the Disney Wish.

Interviewed by Good Morning America’s Tony Morrison and D23’s Jeffrey R. Epstein, Cabo shared some of the intricacies of the castle on the seas they’ve brought to life, which she promises is unlike anything Guests have experienced before:

“The details are just splendid. The railings look like a tiara with jewels on them. The columns almost become trees that spread their limbs across the ceiling, ending at a beautiful chandelier inspired by Cinderella’s gown when it transforms just before the ball. It’s a magical space that sets the tone for the entire ship.”

Cabo shared that one major detail that sets the Disney Wish apart from ships that came before her is that she’s short by one stair hall. While the rest of the ships in the fleet contain three stair halls, the Disney Wish only contains two.

This is a design choice that was made to allow Guests to walk past all offerings, such as the Star Wars: Hyperspace Lounge and The Bayou, down to the Walt Disney Theatre, and more.

“It’s like a film,” Cabo said. “We are always setting up what we want you to see and we want that view to be spectacular.”

Throughout that process, Cabo’s main instruction for the team was that every design element is inspired by Disney stories, like the elevator wallpaper that features hidden pictures of Cinderella’s carriage and her forest friends.

The interviewers shared that they were most impressed with the ship’s room for growth and the potential for future film incorporation. Cabo said that this idea was at the front of her mind, using the example that as the Disney Wish came to life, Walt Disney Animation Studios’ Encanto (2021) was released, yet still made its way into the artwork on the vessel.

Many of Cabo’s favorite features can be found at 1923, one of the dining experiences located aboard the ship. Named for the year that The Walt Disney Company was founded, the team behind 1923 sought to incorporate countless classic films with the help of major studio partner Roger Gould, who could hardly contain his emotions when finally witnessing the fruits of their labor.

“Look what you’ve done for Walt Disney Animation Studios,” Gould told Cabo while taking in the beauty of the finished room. “You’ve written a love letter to us.”

This was a huge point of pride for Cabo, who worked tirelessly to celebrate the foundation of the Walt Disney Company in her work as an Imagineer.

The team went as far as to model the furnishings of 1923 after those found in Walt’s Studio office in Burbank, California, all in an effort to carry forward his legacy.

“Walt influenced generations of magic, and our humble little team gets to carry that mantle,” Cabo said. “I think he’d be proud.”

What surprised Cabo most about the Disney Wish when it finally materialized was the sheer scope of its interior.

“The grandeur was greater than I expected,” Cabo admitted. “When Belle, or Cinderella, or Tiana are on that stage in the grand hall, they look like they truly are in the middle of a castle.”

She closed the interview by sharing some of Disney Wish‘s smaller hidden details that she hopes Guests pick up on. For example, found around the port holes of the ship’s watering hole Keg and Compass are hand carvings made in Bali of octopus tentacles grasping Disney Parks favorites like the Dole Whip and a Mickey ice cream bar.

Do you have a favorite Disney Wish detail? Share yours below!