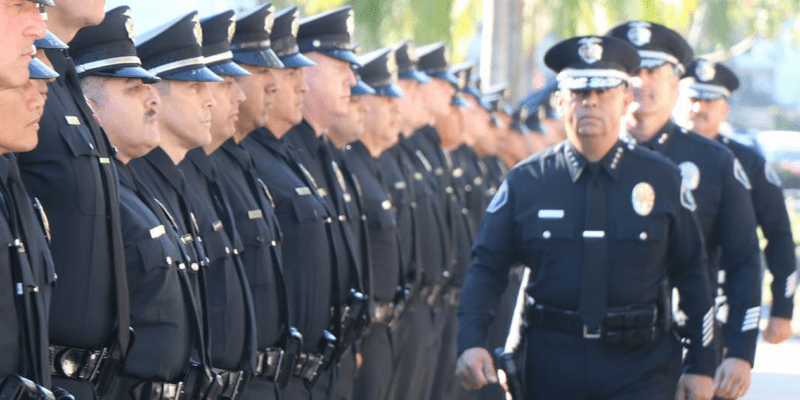 In April 2022, Southern California’s Santa Ana Police Department launched a formal investigation into a group of officers who were accused of blaring classic Disney movie songs at a crime scene to ostensibly avoid video recordings being leaked.

When copyrighted music is used in videos without express permission, they are typically taken down by social media platforms like Instagram, Facebook, and TikTok — the thought process at the time was that the officers were trying to cover something up by blasting the Disney tunes.

At the time, a report noted that this is a “growing trend” in the law enforcement community:

The incident reflects an apparently growing trend in which police officers play copyrighted music in order to prevent videos of them from being posted on to social media platforms such as YouTube and Instagram, which can remove content that includes unauthorized content.

A video of the situation can be viewed below:

In this specific instance, the officers played “You’ve Got a Friend in Me” Pixar Animation Studios’ hit Toy Story franchise, “We Don’t Talk About Bruno” from Encanto, “Un Poco Loco” from Coco, and other famous Disney movie songs.

Details about the department’s investigation have not been revealed to date. However, now the Santa Ana Police Department is facing another major controversy — the agency’s 2019 “Detective of the Year” has been arrested on child sex trafficking charges.

Per the Orange County Register, 43-year-old Gregory Beaumarchais — who was not personally involved in the now-infamous Disney music scandal — has been charged with “sending graphic messages to someone he believed to be a 14-year-old girl.”

OC Register‘s report went on to note that the officer has been placed on administrative leave, and is “facing a misdemeanor count of annoying or molesting a victim believed to be under the age of 18 after communicating with a civilian decoy who was posing as an underage girl, according to a DA statement.

In a statement shared with the newspaper, Orange County DA Todd Spitzer said:

“Police officers are entrusted with the sacred responsibility to safeguard society from harmIt is beyond disturbing that a sworn police officer would engage in inappropriate conversations with someone he believed to be a child. Our children should not have to worry about being preyed upon by the very people we teach them who are there to protect them.”

Beaumarchais is scheduled to appear in court for an arraignment on October 13, 2022. If convicted, he could face up to one year in prison and would be required to register as a sex offender.

What do you think about this situation at the Santa Ana Police Department?