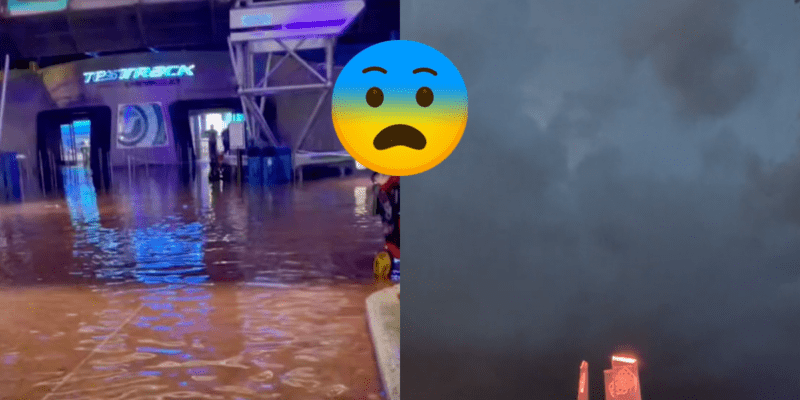 Central Florida is known for severe thunderstorms, humidity, and even hurricanes. The Disney Parks are well-equipped for extreme weather, so much so that some Orlando locals book hotel rooms at Walt Disney World Resort to shelter from the worst storms!

However, we’ve recently reported multiple videos of ankle-deep and higher flooding at the Disney Parks, particularly EPCOT and Magic Kingdom. It seems like the Disney Park drainage system isn’t working as intended.

Last night, a severe thunderstorm hit Walt Disney World Resort and was caught on video by many Guests. Here’s one video from @roadwarriors4life on TikTok:

This Guest didn’t seem to get hit by the brunt of the storm, but many others weren’t so lucky. @waltdisneyworldparks shared a video outside of Test Track at EPCOT:

In the video, the Guest wades through deep water while rain pours down. They also show abandoned strollers and other personal objects left behind Guests that sought shelter from the severe thunderstorm.

Magic Kingdom was also hit, with many Guests like @catherinepreshus0 posting videos of themselves sheltering under cover or in buildings from rain and lightning:

A Disney fan commented, saying that they loved when Florida storms came and went within five minutes, only for the sun to come right back. But the Guest replied that this was an unusually severe storm that lasted all night long:

this went on all night, the rain and thunder subsided but then it was crazy lightening all night.

One of our reporters was at Magic Kingdom last night, and shared this video of Guest fleeing intense rain and lightning:

Unfortunately, worse flooding could be in Walt Disney World Resort’s future. Rainfall in Florida has increased 28% since 1958, according to the Environmental Protection Agency (EPA). The trend of heavy rainstorms is expected to continue due to climate change. The Disney Parks and Disney Springs will need to prepare for more severe weather conditions.

Have you ever experienced severe flooding at Walt Disney World Resort?