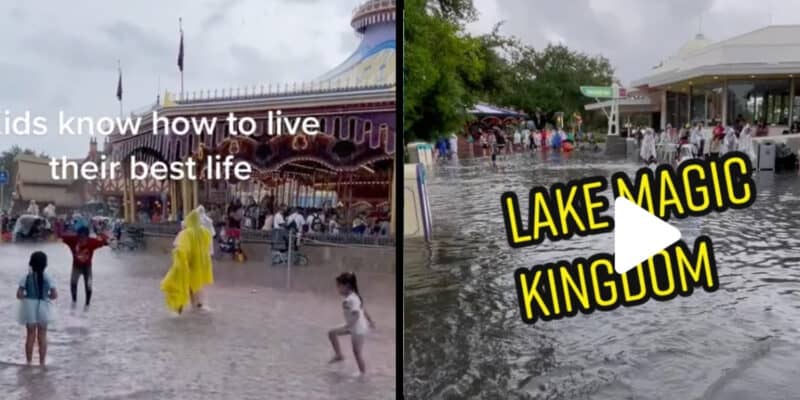 The TikTok user showed another video, with kids splashing around in ankle-deep water:

Walt Disney World Guests are no strangers to the sudden downpours of Central Florida, So much so that ponchos have become must-haves for those planning a trip to the parks.

While the kids in the video can be seen “living their best life,” some commenters were less than impressed. “Magic Kingdom is sinking,” user Oh Garsh wrote, while user Robin credits the draining issue to paving over wetlands.

“Am I the only one wondering if a gator is secretly lurking in the water?” Holly Robetiello wrote, which wouldn’t be the first time park-goers encountered the animal.

Teaching In Kinder added that this is a regular occurrence for this specific area, which is located between Cinderella Castle and Cosmic Ray’s Starlight Café, writing:

“This area has always flooded. It’s at the bottom of several walkways! I’ve been working right there trying to close a merch cart with water up to knees.”

Several instances of similar flooding support this claim. Just days ago, the popular Pecos Bill Tall Tale Inn and Cafe saw flooding that left Guests wading through rainwater inside the restaurant, which can be found in Magic Kingdom’s Frontier Land.

In some cases, Florida storms leave as quickly as they come, while others are more severe and can cause interruptions to the park’s operations.

In fact, there are many attractions at Walt Disney World that are unable to safely run during a storm. Last year, such weather caused 13 rides to close in one day at Magic Kingdom alone.

In all instances, Cast Members remain committed to re-opening quickly and safely, so that memories may continue to be made at “the most magical place on earth.”

In the meantime. Guests are able to explore the many indoor shopping and dining experiences the parks have to offer.

Have you experienced a storm in the parks? Tell us about it in the comments!