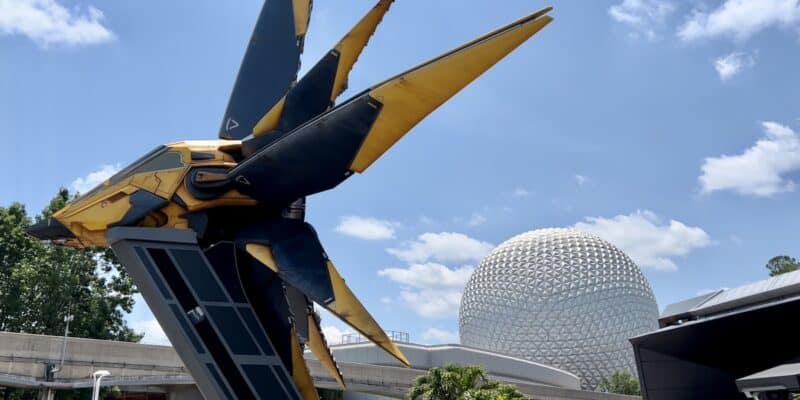 In May of this year, Walt Disney World debuted Guardians of the Galaxy: Cosmic Rewind, a brand new thrill ride that invites Guests to jam out on a chase through space and time alongside Marvel superheroes.

The new EPCOT attraction features the “first-ever reverse-launch on a Disney coaster and is one of the largest fully-enclosed coasters in the world,” according to the website. It also contains an innovative OmniCoaster ride system that allows each individual cab to rotate a full 360 degrees.

The ride boasts a list of firsts, including being the first time Guests have been able to enjoy a Marvel attraction on a Disney property this side of the Mississippi River. This is due to a longstanding court agreement between Universal and Disney that prohibits Disney from representing certain Marvel characters, or even using the Marvel name, in its Florida theme parks.

The attraction is loaded with carefully planned details starting with a tour of the Galaxarium, which showcases the intergalactic wonders that bridge the gap between Earth and the planet Xandar. The ride itself is loaded with intricacies as Disney has basically recreated space indoors.

During the ride, one of six songs blasts overhead, setting the atmosphere for the Guardians’ and Guests’ intergalactic mission to preserve rock and roll. The “Awesome Mix” playlist includes the following tracks:

But with the careful planning involved in executing a project of this scope, fans remain confused about one ride detail that has already proven to be dangerous. Upon exiting the coaster, several Guests find themselves asking “what’s with the stairs?”

One Guest polled Reddit to find out if they alone thought the ride exit was designed poorly.

The stairs as you exit Cosmic Rewind… from WaltDisneyWorld

“What were the Imagineers thinking when they made this decision?” user BOSSK_lunch wrote in the original post.

Commenters agreed that ending a notoriously dizzying thrill ride with a flight of stairs was a bad call, like this response posted by Fixner_Blount:

“I’m not a roller coaster rider but gave this a try. I absolutely loved it, but my entire body was also completely tensed up the entire time, so I basically had rubber legs getting off the ride. Stairs were not what I wanted to see, lol.”

Another user maintained that it has to be a temporary set-up. “They’re the literal masters of this type of design,” user BaconEvolved wrote. “I can’t let myself believe they’d drop the ball that bad.”

A few commenters added that there is a working elevator available, and while this might be true, it’s an unrealistic long-term solution given the volume of Guests the attraction sees each day.

This feedback isn’t the only documented evidence of the potentially problematic design.

One Guest shared that the stairs at the end of Cosmic Rewind led to a broken foot after they felt wobbly upon exiting the thrill ride and missed a step.

Countless others have complained of severe motion sickness, with several reports of vomiting surfacing since the ride’s debut.

In the wake of this backlash, Disney has not commented on the idea behind the stairs at the end of Cosmic Rewind, but Inside the Magic will continue to update readers as we get more information.

If you are riding Cosmic Rewind and experience dizziness, nausea, or any other concerning symptoms, be sure to speak to a nearby Cast Member for assistance.

What do you think of the stairs at the end of Guardians of the Galaxy: Cosmic Rewind? Dangerous design flaw or no big deal? Comment below!