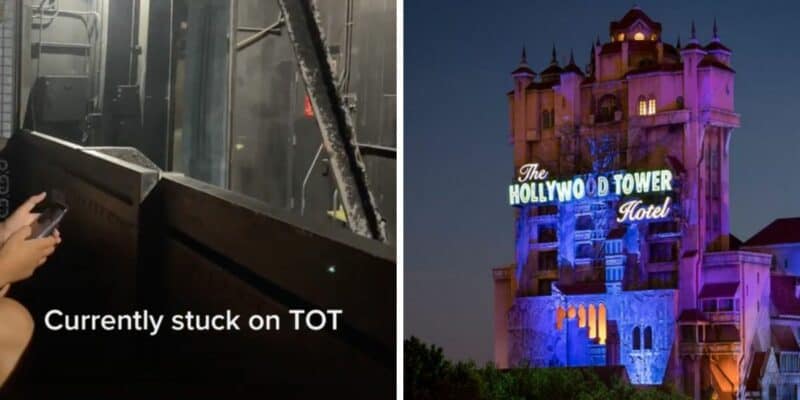 Unfortunately for some Guests, they recently found themselves trapped inside the Tower of Terror on July 14, 2022.

Known for its creepy, old Hollywood aesthetic and its sudden and unsuspected drops, The Twilight Zone Tower of Terror at Walt Disney World’s Hollywood Studios is a must ride for many park Guests. Per its description, riders can expect to:

On a recent trip to Disney World, Guests were trapped inside the elevator as the ride faced technical difficulties. TikTok user victoriabarros_ shared the following video to the social media platform, sharing how she was stuck inside the infamous elevator:

For these riders, getting trapped in an elevator appeared less than ideal, with commenter Ev writing “Immediately, no.” Similar footage of the attraction malfunctioning has been shared over the years, breaking down at various points in the ride and requiring evacuation.

For some, however, getting stuck on a ride is an opportunity to sight see. It’s an inside look at the inner workings of some of the most complex and innovative rides in the world, or perhaps it’s an opportunity to get up close and personal with decades old animatronics that brings visitors back time and time again.

Some have been lucky enough to be ushered backstage after a broken down Splash Mountain left them hanging with their favorite riverside critters for extended periods of time, while others had their logs sink from beneath them.

Either way, expecting the unexpected has become a part of the Disney Parks experience.

Have you ever been trapped on a Disney Parks attraction? Let us know in the comments below!