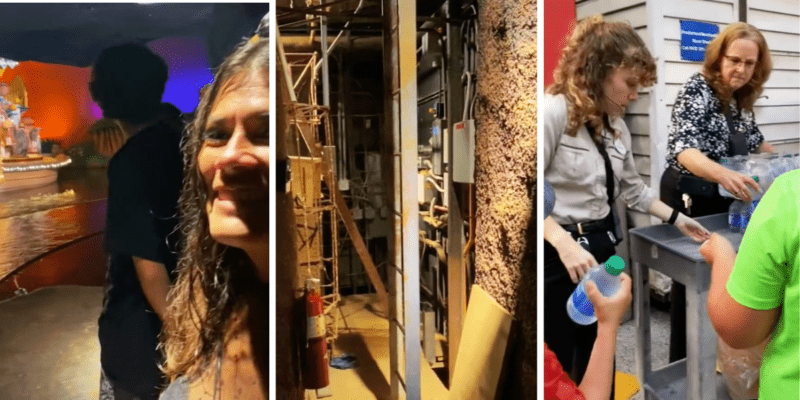 Splash Mountain, in Magic Kingdom at Walt Disney World Resort, reopened in February after a short scheduled refurbishment. Unfortunately, the refurbishment was less successful than most Disney Parks fans hoped, and many Guests report the animatronics and special effects are in “terrible” condition.

Recently, some Guests were stuck on Splash Mountain for long enough that they were eventually evacuated off the Magic Kingdom ride. TikTok user @thenobleways shared a video of their experience:

The video starts with the Guests standing next to their log-shaped ride vehicle near the Riverboat scene at the end of Splash Mountain – where animatronic characters joyfully sing “Zip-A-Dee-Doo-Dah.”

As the Guests are evacuated, the video shows pipes behind the walls of the ride and eventually the backstage where spare Splash Mountain ride vehicles are stored.

Then, the Guests head outside where they see the back of the Splash Mountain building and Cast Members hand them all Dasani water bottles to beat the Florida heat.

After everyone was taken care of, the Guests were escorted back into Frontierland via a Cast Member entrance near the Splash Mountain photo counter and bathroom area.

Splash Mountain opened in 1992 at Walt Disney World’s Magic Kingdom. Based on the now-banned Disney film Song of the South (1946), the ride is scheduled to be rethemed after Princess and the Frog (2009) in 2024 at Walt Disney World Resort and Disneyland Resort. From Disney:

Have you ever gotten stuck on Splash Mountain? Share your experience with us in the comments!