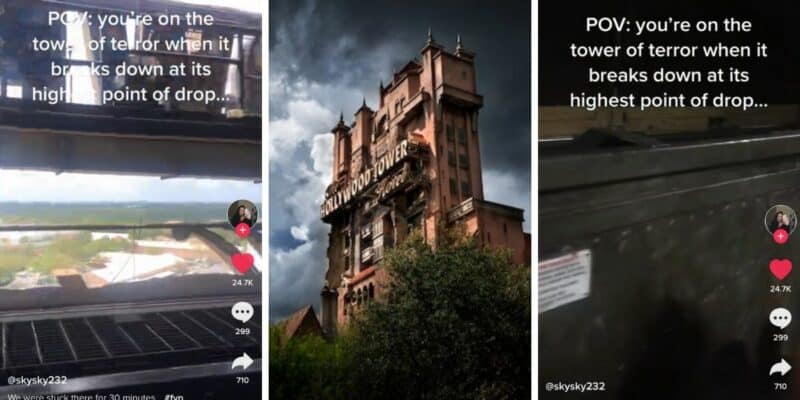 The Twilight Zone Tower of Terror is one of the most popular rides at Walt Disney World.

Located at Disney’s Hollywood Studios, the thrill ride transports Guests into the Twilight Zone after boarding a maintenance service elevator at the Hollywood Tower Hotel.

If you have never experienced The Twilight Zone Tower of Terror at Disney’s Hollywood Studios, the Walt Disney World website describes the attraction as:

After Guests board the maintenance service elevator, they witness a serious of scenes as they are slowly brought up 13 stories. The elevator then moves forward, out of the first shaft, and into the second shaft, making Guests feel as though they are truly entering the Twilight Zone. Right as they enter the second elevator shaft, Guests are either dropped a few stories or shot upwards.

On a recent trip, right as Guests entered the second elevator shaft and were anticipating either a drop or a rise, the elevator just stopped completely.

The craziest part about all of this is that one of the Guests aboard the elevator caught it all on video and posted it to TikTok.

Not only were Guests stuck right before the drop (or lift), but they were stuck there for 30 minutes!

We were stuck there for 30 minutes… #fyp #foryou #towerofterror #disney

It seems the Guests were eventually brought down and unloaded safely as towards the end of the video, the elevator shaft was seen at the end of the ride, but with the lights on.

Have you ever been stuck on Tower of Terror? Let us know in the comments below.