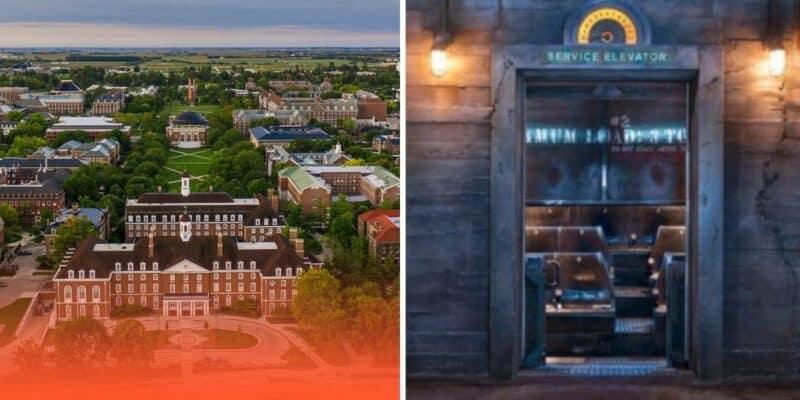 At Walt Disney World Resort, one of the most terrifying attractions is the illustrious Tower of Terror. Located in Disney’s Hollywood Studios at the end of Sunset Boulevard, the decaying building lours in Guests with intrigue, as they explore the abandoned ruins of the hotel. Once they enter the service elevator, however, things are never the same.

The Twilight Zone Tower of Terror is a thrilling 13-story drop tower that combines the idea of a dark ride and a drop tower together. One of the best aspects is that the drops are randomized, and cause Guests to feel their stomach in their throat while going both up and down. Although terrifying for some, the attraction is incredibly safe and restrains Guests in their seat, so even if you feel like you are going to fly through that massive window, you can never get too far off of that seat!

But what would happen if you felt that same gut-wrenching Tower of Terror drop in a regular elevator. One student at the University of Illinois in Chicago took to Reddit to ask why the elevators located at University Hall feel like the Tower of Terror attraction at Disney World, and other students even chimed in with agreement!

Why do the elevators at University Hall feel like the Tower of Terror ride at Disney. I feel like I’m going to throw up ever single time I use them.

Sometimes, getting up for class can be a scary enough task in itself, we could not imagine what it would be like have to feel your stomach fly up on your way there!

Dbello2448 commented on the thread stating:

They get stuck all the time and sometimes go up and down on their own, open doors on their own. Everyone on the advising staff has been stuck at least once.

No-Championship-4 seems to think that the University Hall elevators and Tower of Terror have a lot more in common than we may think:

UH is cursed, just look at it

Insert_title_here seems to be ok with the attraction aspect of the elevator, as long as it means they do not need to take the stairs!

Lol, at least they’re working! They tend to malfunction quite a bit. I had to walk up ten flights of stairs to make a meeting with my advisor once. 🙁

Of course, the elevator is not flinging up students against the ceiling when it goes up and down, as Tower of Terror would without and seatbelts, but it clearly is generating a similar drop sensation that the attraction has.

Disney describes Tower of Terror as:

Too Terrifying for Kids?
This attraction includes sudden, fast drops in a dark, enclosed space which may be frightening to some Guests.

Have you ever felt like a normal elevator ride was actually a stomach-churning Tower of Terror experience?