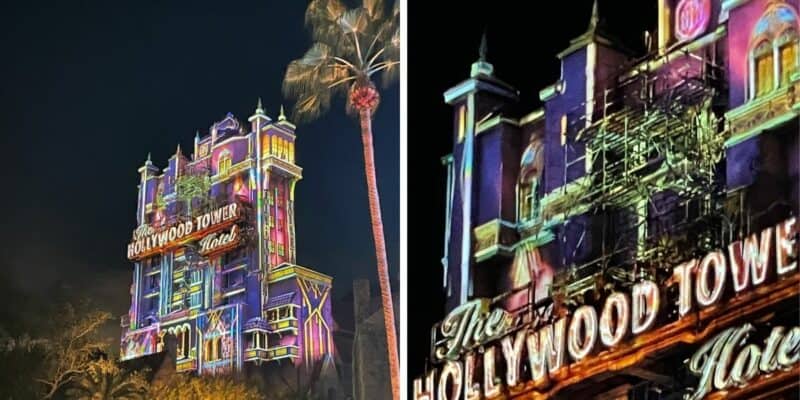 In my opinion, the Twilight Zone Tower of Terror is one of the best rides at Walt Disney World Resort. Imagineers have set up the attraction in such a way that it entices you from the moment you park at Disney’s Hollywood Studios. Once you walk down Sunset Boulevard, you are immediately brought into the storyline, and as you approach the hotel, you know something far eerier has happened.

The hotel is themed perfectly, looking very abandoned and decayed. It was left after that one dark and stormy night where a family used the service elevator to get to their room and ended up dead in the 5th dimension. From the cobweb-filled lobby to the spooky library and then the terrifying boiler room, Guests have every reason to turn around and run from the attraction; even the Cast Members costumed as bellhops warn you of the terrors.

Lately, we have seen some external construction being done on Tower of Terror. The construction recently caused the attraction to shut down for a while, but overall, the ride will not be closing for refurbishment, according to the Walt Disney World Refurbishment Calendar. That being said, it seems that the work may be affecting the wait times for Guests. Yesterday evening, the construction scaffolds were still up on the attraction, and unlike the rest of the Park’s relatively short waits at Park close (all around 15-minutes), while Tower of Terror had an 80-minute wait.

It seems that one of the shafts running the attraction was not operational as there was work being done, as we were told. This morning, 10 minutes after the Park opened, the ride is already at a 50-minute wait, just short of the highest wait in the Park, which goes to Slinky Dog Dash in Toy Story Land. As we are not in the Park, we cannot be sure if the higher wait time is attributed to the same shaft still not working or if it is just the morning rush. Be sure to keep an eye on your My Disney Experience if you want to ride Tower of Terror to see when the best possible time is to hop in the queue.

Remember, if you do not want to wait for attractions, you can always purchase Disney Genie+, which would give you Lightning Lane access to the majority of attractions for $15.00 per person per day, including Tower of Terror.

What other attractions at Disney World do you think need a little TLC? Let us know in the comments below.

Comments Off on Tower of Terror Construction Continues, Guests Stuck in Massive Line to Ride