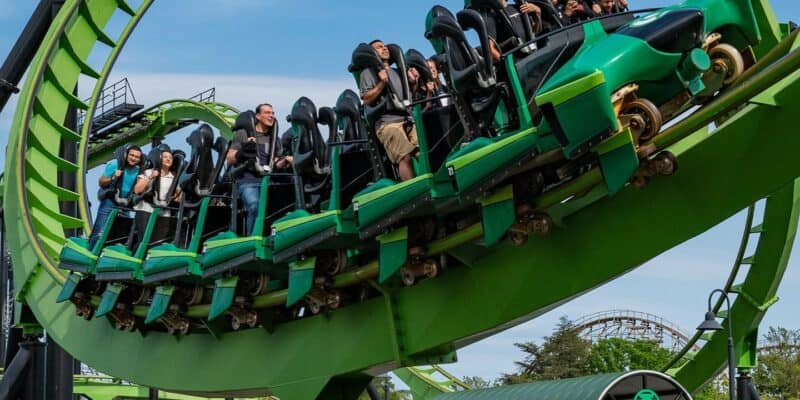 When visiting a theme park, the last thing to go through Guests’ minds is the chance of seeing themselves involved in an accident. However, with high-speed roller coasters and thrill rides, there is always a possibility that something unexpected could happen.

Recently one Guest visiting Six Flags Great Adventure, located in Jackson, New Jersey, shared a rather unpleasant experience after riding one of the most intense roller coasters in the Park.

Redditor u/Thehypnotist333 posted about how they “nearly got a concussion” after riding Green Lantern at Six Flags Great Adventure. They commented the following:

What is the deal with this coaster? I rode this the other week and nearly got a concussion from my head banging violently between the restraints. When I got off I had to check to make sure my ears weren’t bleeding. Same thing happened to my buddy next to me. We rode near the back.
I’ve heard lot’s of people complain about how uncomfortable this ride is on the private parts and the skull.
The track layout is actually awesome though IMO. Why don’t they just replace the trains with standard floorless ones like on Medusa?

User u/TopazScorpio02657 commented that this attraction is “one of those coasters you have to ride defensively.” They commented that they usually put their head firmly back against the headrest and feel “mostly okay” during the ride, adding that this coaster is not one of their favorites because they don’t enjoy having to brace themselves to get through it. They said this is “too bad because it has a great layout especially for a stand up coaster” and commented they could realistically see the attraction being replaced in the coming years.

Redditor u/vote4gordo voiced their dislike for the attraction commenting the following:

It’s a horrible ride. I will never ride again. The concussions and makes my feet hurt.

While the Park advertises Green Lantern as one of its most extreme attractions, categorizing it under “Maximum Thrill Level,” it seems to be a common opinion that the ride is aggressive and somewhat uncomfortable, at least to some Guests.

However, Redditor u/ILikeToSayHi shared a major hack for everyone who would like to give this coaster a second chance or try it for the first time, commenting the following:

I actually like it because there’s a way to ride it enjoyably. Slight bend of the knees before restraints lock, butt 2 inches above bicycle seat, push shoulders up and into restraint. This keeps your ears above the restraints, no crotch pain, and still allows fully extended legs for no leg pain on the positive g’s.

so after slight bend of the knees before they lock, when you hear it lock, push your shoulders up and into the top of restraints like you’re shrugging. this way when they come check and push you can then relax shoulders afterward and you’ll have a buffer to let your ears above it. always ride front for smoothest

The original poster commented they would “hesitantly try this” on their next visit to the Park, as they are sure they’d enjoy the ride if they could get comfortable.

“In Brightest Day, in Blackest Night, No Loop Shall Escape …”

Green Lantern at Six Flags Great Adventure is one of the Park’s most thrilling coasters, taking Guests on a 63 miles per hour adventure through 4,155 feet of green and yellow track, soaring up a 155-foot hill, down a 144-foot drop, and a 121-foot loop, among other loops, drops, and crazy corkscrews. “Humans just weren’t designed to move this fast … but super heroes were.”

The Park’s official website describes the attraction as follows:

Hal Jordan rose from test pilot to the superhero GREEN LANTERN—an icon of courage, confidence, and strength. These are three qualities you will need to have in abundance to take a seat on this utterly insane ride. Except you won’t be sitting, because GREEN LANTERN is a stand-up coaster!
You won’t believe how smooth this ride is, considering you are flying at 63 miles per hour—all while standing up. Humans just weren’t designed to move this fast … but super heroes were.

The bright green and yellow track will lead you on a record-setting journey, smashing all the previous title-holders for height, speed, drops, inversions, length.

It all starts with a 155 foot hill. Now that you’re committed, how about a bravery-crunching 144-foot drop followed immediately by a 121-foot loop? Now you’re starting to feel super! On the blisteringly fast 100 foot diving loop, wave high to SUPERMAN Ultimate Flight next door, but don’t get too friendly because immediately you’ll soon be zooming into an ultra-unique 72-foot inclined loop. The entire vertical loop is tilted at an angle, and you enter it sideways, because super heroes don’t need to fly in straight lines.

Over the 4,155 feet of track, you’ll hug the ground, take crazy corkscrews, and do your best to break the sound barrier over and over again. All in a day’s work for GREEN LANTERN!

We have recently seen Six Flags make tremendous efforts to continue improving its Parks across the country, with Six Flags Discovery Park in Vallejo, California, and Six Flags St. Louis, in Eureka, Missouri opening new thrilling attractions for Guests to enjoy. And over at Six Flags Magic Mountain in Valencia, California, the tallest and longest single-rail coaster on the planet, according to Six Flags,  is opening this month!

Plus, big things are coming to Six Flags Parks in Texas. Six Flags Fiesta Texas will open a groundbreaking roller coaster this month, Dr. Diabolical’s Cliffhanger. And it was recently announced that AQUAMAN: Power Wave is set to open next year at Six Flags Over Texas. The ambitious projects are sure to bring loads of fun for Guests at the Texan Parks and call on more than a few thrill-seekers who will visit from all over the country to experience these exciting new attractions.

Have you ever been on Green Lantern at Six Flags Great Adventure? Let us know in the comments below!