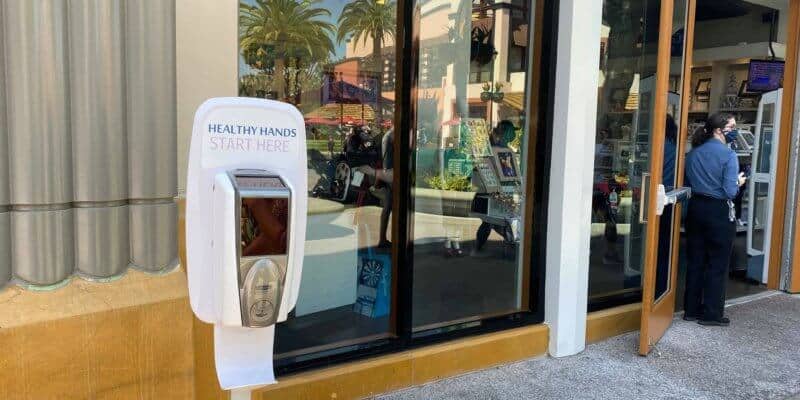 When Walt Disney World Resort reopened during the ongoing COVID-19 pandemic in 2020, things looked different at the Disney Parks and Resorts.

Guests are now required to make Park Reservations ahead of their visit, securing a Park Pass for their chosen Disney Park. Character interactions were distanced, though up-close encounters have since returned. Cleaning and disinfecting measures were increased, including the addition of hand sanitizer stations around the Disney Parks and Resorts.

The most controversial addition was the mask requirement, which was lifted in stages and removed in April 2022. While many were excited, some Guests felt it would make their vacations unsafe.

Now, a group of Walt Disney World Resort fans is speaking out against the removal of yet another safety measure: hand sanitizer stations. u/bluescrubs33 posted on Reddit:

Went to Epcot today, haven’t been since early June. The hand sanitizer stations seem to be gone. Nothing at the entrance or exits of any rides. Am I just noticing this?

u/mdrew86, who visits the Disney Parks often, said that it started at the Theme Park attractions, then spread to the restaurants and gift shops. Finally, the hand sanitizer stations were removed from the Disney Parks and Resorts altogether.

While most Walt Disney World fans say they bring hand sanitizer to the Parks, many were disappointed with this change. u/Beer_Bryant wrote:

I always brought my own hand sanitizer, but wish Disney would still keep the sanitizer dispensers so some of the other nasty guests would still be able to use them.

u/bluescrubs33 agreed, noting that Guests who don’t bring sanitizer would be more likely to use it just because the dispensers were directly in front of them:

That’s my thought. They weren’t the highest quality and it kind of stunk, but people were more likely to use them because they were there. And there’s other diseases besides Covid.

u/Northernbelle09 said the change was “disappointing:”

Disappointing as disney seems to be a breeding ground for all germs. Many a time over the years i have come home sick 🤦‍♀️

One Walt Disney World fan, u/Underbadger, suggested that the Parks are likely removing the hand sanitizer stations because it’s one less thing that already stretched-thin maintenance Cast Members have to take care of:

I do bring my own, because they were nearly always empty on my last visit, and it’s important to wash or sanitize your hands often.

WDW isn’t “driving up prices” because of a few cents worth of hand sanitizer. They’re likely removing them because it’s one less thing for maintenance to take care of, and maintenance is still short staffed.

Do you think hand sanitizer stations are necessary at Walt Disney World and Disneyland Resort?