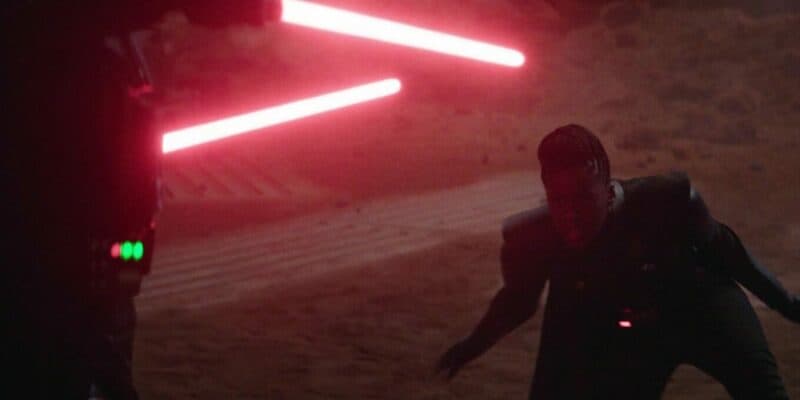 Stuart Beattie reveals that his original script had Reva dying by Vader in the end, but Joby Harold decided to change this.

After fans learned that the rumors of Obi-Wan almost receiving his own trilogy of movies were true, it didn’t take long for more news about the series to be revealed. The Kenobi finale is now one of the most successful finales for Disney+ which isn’t that surprising since fans got to see Vader and Kenobi duel once again.

Obi-Wan Kenobi is now rumored to return for a second season, but fans are unsure what the story could be about. Now that fans know that Season 1 was based on Beattie’s original script, the writer has shared more about his intentions with his version of Kenobi’s story.

In a recent interview with The Direct, the writer admitted that Reva wasn’t supposed to know about Darth Vader’s secret until Obi-Wan tells her:

“Yeah, except the only little difference in mine was she didn’t know Darth Vader was Anakin. Cause I was like, ‘How’d she know that?’ All she saw was Anakin as Anakin because he hadn’t changed in the suit yet, right? So Anakin killed her friends, put the scar on her, almost killed her, left her for dead, basically. So, in her mind, the Jedi Council were the biggest villains in the galaxy. She believed the lies that they were plotting a coup to overtake and get power and all that, but they were stopped by the Clones. So she believed that’s why she’s hunting Jedi, because she believed the Jedi are the worst, basically.”

Beattie also noted that Reva would learn who Darth Vader really is and this is what lead to her original death in the series:

“Because I figured, ‘How would she know that this thing in a mechanical suit that everyone calls Darth Vader is the guy who killed her, or tried to kill her?’ So, it was Obi-Wan kind of letting her in on that secret and that revelation that makes her kind of go, ‘Oh my god, I’ve been wrong this whole time.’ And so she goes and basically saved Kenobi by sacrificing herself, telling Vader, ‘I killed Kenobi.’ And then Vader killed her, [with her] knowing that Vader would kill her. So, that kind of completed her arc. So just a little bit different that she was, yeah, absolutely, the Inquisitor hunting Kenobi all the way through and driven by her own personal demons.”

Beattie made it clear that he wanted Reva’s arc to be completed and that meant that she needed to die because “you can only redeem so much” when it came to an Imperial Inquisitor:

“Yeah, killed by Vader at the end of it. Yeah, I wanted this story, I wanted her story to end. I wanted Reva to play her part in the Kenobi-Vader story, which was, essentially, at the end, she was the one that allowed Vader, basically told Vader to stop hunting Kenobi. You know, she ended the obsession Vader had with Kenobi. She claimed it was over, it’s done. So that was, that was her role to play. And she’d done so many terrible things, I felt she had to die [laughs]. You can only redeem so much.”

While most fans were fine with the series, many were not happy with Reva surviving and being allowed to escape. Star Wars canon has made it clear that Vader doesn’t let people know his Jedi past and they normally die. With Vader and the Grand Inquisitor letting Reva live felt off and many fans wished the Inquisitor died in Episode 5.

If Beattie’s story was told, then fans may have had a better time accepting Reva as a character as she would’ve thought that the Jedi betrayed her. After being manipulated by Vader and learning she was serving the person who actually killed her friends and family, it would make sense for Reva to go after Vader again.

Even if she couldn’t kill him, Reva’s sacrifice to Vader would’ve led to Kenobi’s whereabouts on Tatooine remaining a secret. If Reva is found by the Empire, they could easily learn where Kenobi is living which would break canon. Even though Star Wars won’t let this happen, it feels like another story with the redeemed Inquisitor is impossible to tell because she can’t really fight the Empire without exposing herself and the Rebellion wouldn’t accept her due to her time working with the Empire.

Do you think Reva should’ve died in Obi-Wan Kenobi? Let us know what you think!

Comments Off on “You Can Only Redeem So Much,” Original ‘Kenobi’ Script Killed Controversial Character