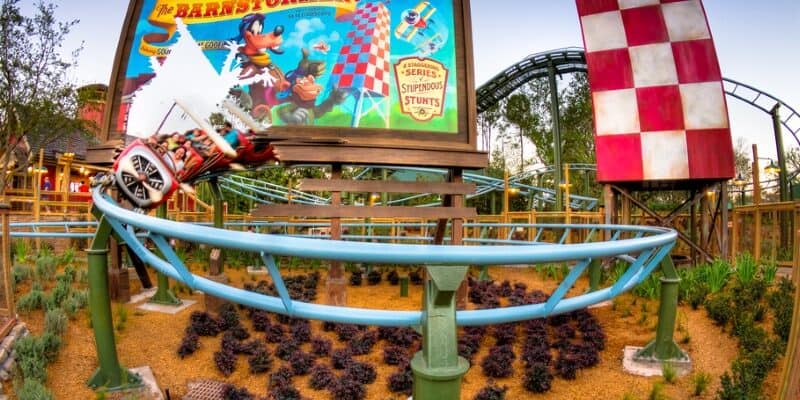 At Walt Disney World Resort, there are a number of roller coasters to choose from. From EPCOT Park’s brand new Guardians of the Galaxy: Cosmic Rewind to Magic Kingdom Park’s classics, Space Mountain and Big Thunder Mountain Railroad, there’s no shortage of options for coaster lovers.

Most of the coasters at Disney World’s four theme parks, though, are intended for older kids and adults. Space Mountain has a 44-inch height requirement, for example, while even Toy Story Land’s relatively tame Slinky Dog Dash asks that riders be at least 38 inches tall.

The most family-friendly coaster at the Disney’s Orlando flagship property is The Barnstormer, located in Magic Kingdom’s Fantasyland area. Featuring “The Great Goofini,” The Barnstormer has only a 35-inch heigh requirement, making it perfect for parents and toddlers to ride together.

Now, a new permit indicates that the family-friendly roller coaster will soon be receiving updates of some kind. The permit is to “Provide labor, material and/or electrical for construction,” but the extent of the work is not outlined.

The upcoming project will be overseen by Disney’s own Buena Vista Construction Company.

Walt Disney World Resort officials have not shared details about what upgrades or changes are coming to The Barnstormer at this time. The ride does not appear on the theme park’s official non-operable rides calendar, so the project is unlikely to be extensive.

More on The Barnstormer

The Barnstormer is officially described as:

Just Plane Fun
Make your way to an open-air barn where Goofy—known as The Great Goofini—performs his world-famous aerial stunt show.

Climb aboard a wacky stunt plane and hold on tight as you take to the skies above Fantasyland.

A Staggering Series of Stupendous Stunts
Ascend to the top of a wooden observation tower. Then, brace yourself as you swoop through the busy barnyard, darting and soaring before “landing” safely during the grand finale.

It’s a goofy good time for kids—and aspiring pilots of all ages!

Do you and your family like Fantasyland’s kid-friendly coaster?