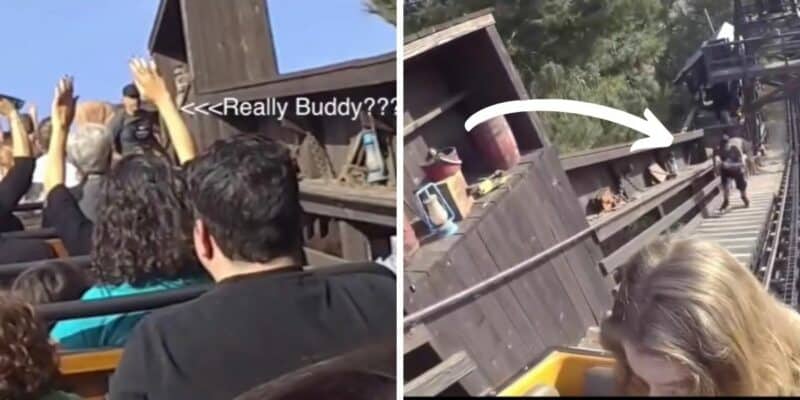 On a recent Disneyland vacation, Guests riding Big Thunder Mountain came to a sudden stop due to a Guest jumping out of the ride vehicle in an attempt to retrieve his phone.

Big Thunder Mountain Railroad is an adrenaline filled coaster located in Walt Disney World and Disneyland Resort that takes Guests through the wild wild west. Known as the “Wildest Ride in the Wilderness”, Disneyland describes this coaster as:

Well, on a recent trip to Disneyland, Guests had to evacuate Big Thunder Mountain after a Guest decided to jump out of the moving ride vehicle in an attempt to retrieve his phone.

In a video posted to TikTok, as Guests went up the second hill on the ride, a Guest was caught jumping out of the ride vehicle and running down the hill in order to try and find his phone. In the screenshot above, you can see where the Guest got out of the vehicle.

On his way back up the hill, the ride vehicle came to a complete stop and Cast Members came over the loud speaker to inform the ride will be shutting down.

In the screenshot above, the Guest apologizes to the rest of the ride group as he runs back up the hill, saying “Sorry, y’all”.

Guests were then evacuated off of Big Thunder Mountain and brought to safety.

Jumping out of a moving ride vehicle after being told to stay seated at all times is extremely unsafe and a violation of the rules at Walt Disney World and Disneyland. Depending on the scenario, a Guest can be removed from the park and even receive a lifetime ban for breaking the rules such as these.

For Disneyland’s full rules and regulations, visit their website here. Additionally, if you are ever unaware of whether something is or is not allowed, you can always ask a nearby Cast Member.