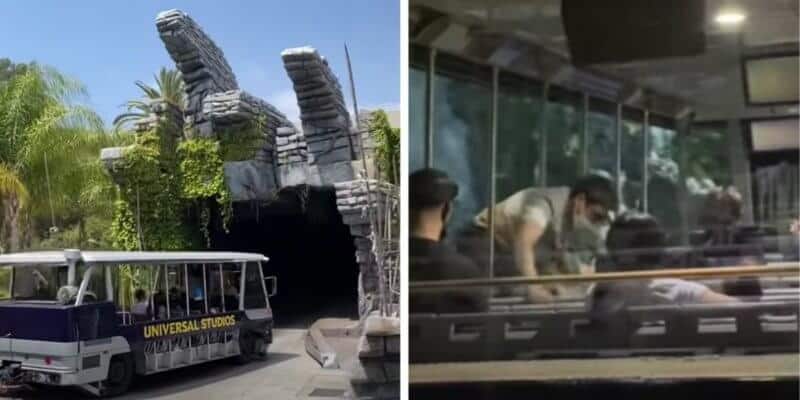 If you have ever been to almost any attraction, from your local fair to the biggest attractions at Disney or Universal, one message almost always remains the same. Guests are always reminded to keep their hands and feet in the vehicle at all times. At Universal Studios Hollywood, it seems one gentleman did not think this to be the case.

Universal Studios Hollywood recently reopened after being closed for almost a full year due to the ongoing COVID-19 pandemic. It seems that just a few days ago YouTuber Theme Park Mikey was riding the Universal Studios Tour when a Guest jumped out of the vehicle!

Below, you can see the video of what transpired during the ride, however, we want to remind all readers that this is unsafe behavior, and Guests should never jump out of any moving attraction until it is stopped and they are instructed to do so.

It seems that during the King Kong section of the attraction, you can see a Guest jump out of the left side of the vehicle and then jump back on. As soon as this occurred, the Team Member stopped the attraction. Theme Park Mikey continued to narrate the ongoing situation as the screens turned off and the lights turned on, and it seems that the Guest dropped something out of the vehicle, and then hopped back in. But, the Team Member thought there was a medical emergency, and called for backup.

In the end, the ride vehicle began moving again, but it is clear that the interruption did not allow the Guests to experience the attraction the way it was intended.

Please note that if you ever drop something outside of your ride vehicle when on any Universal attraction, you must not attempt to grab it. Once you have safely exited the ride, let a Team Member know what happened, and if it is retrievable, they will be able to get it for you by the end of the day. This is something that often happens on roller coasters at many theme parks with cell phones, wallets, hats, and glasses, so please trust that the people operating the attractions will have better luck retrieving your lost item!

Breaking the rules like this could have you removed from the theme park, which is not how any Guest ever wants their day to end!

Universal actually has a rule that does not allow filming on their attractions, which is one less possibility of a personal item falling out of any Guest’s hand when riding.

Have you ever had something fall out of your hands or pocket when on an attraction?