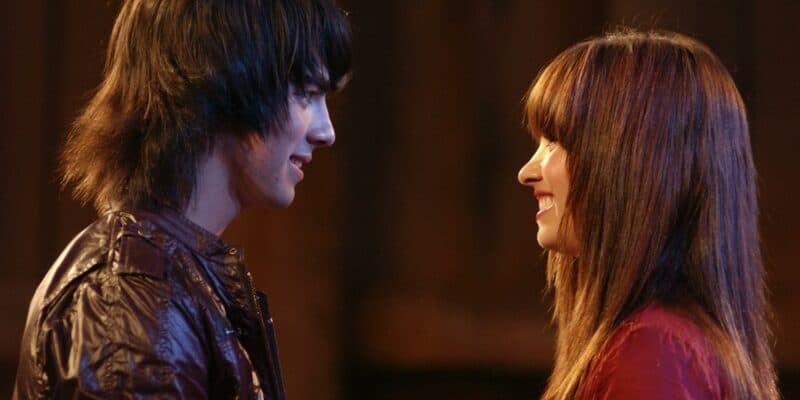 Nick, Joe, and Kevin Jonas — the three brothers who quickly became a pop sensation and a heartthrob brother band thanks to their success on the Disney Channel.

The three brothers first formed a boy group called the Jonas Brothers in 2005 and had hits including “Year 3000”, “Love Bug”, and “S.O.S”. They also starred in Disney Channel Original Movies including the Camp Rock franchise, as well as television shows such as Jonas.

Years later, fans of the Jonas Brothers continue watching their Disney Channel movies and television shows as well as listen to their older music, including popular songs from the Camp Rock franchise.

One fan had her dreams come true when she auditioned for competition television show, The Voice, with Joe Jonas as a judge.

The contestant had a “I love Joe Jonas” t shirt on, so Joe Jonas decided to make some magic for this woman. In the video clip, which was shared to TikTok, you can hear Joe ask “Do you know the Camp Rock duet with Demi?” to which the entire audience started cheering and the song began to play.

Joe and the contestant proceeded to sing “This is Me” from Disney’s Camp Rock, which was such a special and memorable moment. Check out the video below or by clicking here.

All three brothers are now married and are even starting their own individual families. Kevin Jonas was the first to get married to his wife, Danielle, in 2009 and have gone on to have two daughters together, Alena Rose and Valentina Angelina.

10 years later, Joe Jonas married Game of Thrones star Sophie Turner at a secret Las Vegas location. They have a baby girl named Willa who they welcomed in July 2020. Joe and Sophie are also expecting their second child together.

And finally, Nick Jonas and Priyanka Chopra (Baywatch, Matrix Resurrections, Mary Kom) wed in a Western ceremony and a traditional Hindu ceremony in December 2018. Recently, the couple welcomed a baby via surrogate.

Camp Rock follows Mitchie Torres (Demi Lovato), an aspiring young musician who hopes to become a professional singer. The description is as follows:

Mitchie wants to go to a music camp named “Camp Rock”. Since the family can not afford the tuition, Mitchie’s mother, Connie (Maria Canals Barrera), arranges to cater food for the camp, thus allowing Mitchie to attend. In return, Mitchie must help her mother out in the kitchen.

Meanwhile, spoiled pop star Shane Grey (Joe Jonas), of Connect 3, has been assigned to be in charge of dance classes for one month at Camp Rock by his bandmates Jason (Kevin Jonas) and Nate (Nick Jonas) and is forced to record a song with the winner of Final Jam. Shane accidentally hears someone singing on the first day and falls in love with the voice, but does not know the identity of the singer.

What did you think of this performance of “This is Me” from Camp Rock? Let us know in the comments below.