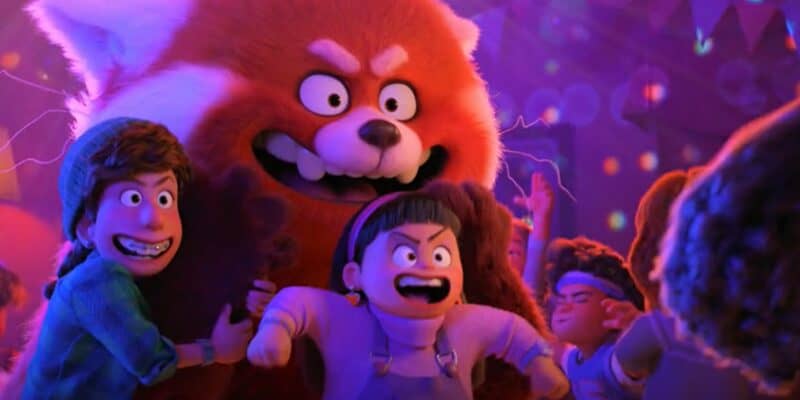 One of the most talked-about films made its way into the Disneyland Resort recently.

Related: Disney Attraction Reopens After Shutting Down For Retheme

There is no denying that both Pixar and Disney have been on a rill as of late with films like Soul (2020), Encanto (2021) and now Turning Red (2022) with all three receiving critical and commercial praise. But Pixar’s latest film Turning Red found itself at the center of worldwide controversy after its release.

Now it seems that Disney has gone ahead and added characters from the film to an attraction at Disneyland California Adventure which you can see in a tweet below from Mouskegamer (@Mouskegamer):

Turning Red has showed up on the Pixar Pal-A-Round on Pixar Pier! Panda Mei on one side, human Mei on the other.

Turning Red has showed up on the Pixar Pal-A-Round on Pixar Pier! Panda Mei on one side, human Mei on the other. pic.twitter.com/QigtqBRFkz

Turning Red is no stranger to controversy and backlash as it received an immense amount upon release. Pixar Animation’s Turning Red was released directly to the Disney+ streaming platform on March 11, 2022, and shocked many Disney fans with its more adult-oriented storytelling and mature themes.

The coming-of-age film began receiving backlash online primarily due to its exploration of a young girl getting her period for the first time. One scene, specifically, features the line, “I have ibuprofen, Vitamin B, a hot water bottle, and pads.” While this dialogue is a little more graphic than what most are used to from Disney or Pixar, the film prides itself on being relatable as well as “real” to viewers who may be going through the same thing Mei, the main character, is going through.

Despite some viewers’ assertions that the movie is “inappropriate” or “over-sexualized” for diving into this storyline, many fans have taken to social media to defend The Walt Disney Company and Pixar for their portrayal of something that is undeniably authentic to the coming-of-age experience for young women around the globe.

Related: Disney Ride Breaks Down Behind Waterfall, Guests Stranded In The Dark

The film was also at the center of controversy as The Walt Disney Company struggled with its response to Florida’s “Don’t Say Gay” bill. Word got out that Disney actually ordered LBGTQ+ scenes to be cut just after we found out that the company backed the controversial bill.

Now it seems that the dust has settled a little regarding this movie and Disney is finally starting to acknowledge it in the Parks. The official description of the movie reads:

Disney and Pixar’s “Turning Red” introduces Mei Lee (voice of Rosalie Chiang), a confident, dorky 13-year-old torn between staying her mother’s dutiful daughter and the chaos of adolescence. Her protective, if not slightly overbearing mother, Ming voice of Sandra Oh), is never far from her daughter — an unfortunate reality for the teenager.

As if the changes to her interests, relationships and body weren’t enough, whenever she gets too excited (which is practically ALWAYS), she “poofs” into a giant red panda! Directed by Academy Award winner Domee Shi (Pixar short “Bao”) and produced by Lindsey Collins.

Ready for a ride on the wild side? Lift off and soar 150 feet into the air for incredible panoramic vistas of Disney California Adventure Park—and beyond!

As you travel around the wheel, your gondola also sways and slides forward and backwards on interior rails for an extra thrilling experience.

It’s an uplifting trip around the whirl-d!

Pixar Pal-A-Round is one of only 2 Ferris wheels in the United States that combine fixed and sliding gondolas. The other is the original—the Wonder Wheel at New York’s Coney Island.