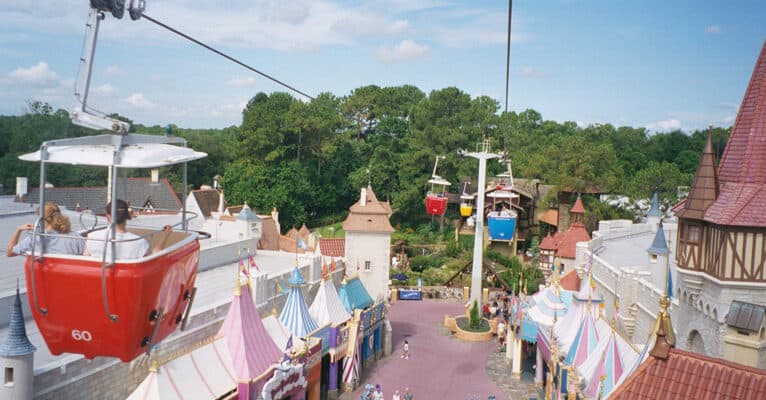 Walt Disney World is constantly evolving. When the Parks first opened in 1971, it included various rides and attractions, but some of those have since closed to make way for more updated attractions.

For example, Snow White’s Scary Adventure was a dark ride located in the Fantasyland section of Magic Kingdom. However, in 2012, it was replaced by what is now known as Princess Fairytale Hall.

Mr. Toad’s Wild Ride also used to be located in Fantasyland at Disney World’s Magic Kingdom, but a few years ago it was revamped and turned into what is now known as The Many Adventures of Winnie the Pooh.

Also located in Magic Kingdom was a ride called the Skyway, which is similar to the Disney Skyliner. Though the Skyway has been demolished, remnants of the extinct attraction can still be seen in Magic Kingdom.

The Mouselets shared a video to TikTok revealing where the Skyway used to reside, and how you can still see remnants of the ride in Magic Kingdom today.

Near Mickey’s Philharmagic, Peter Pan’s Flight, and Pinocchio Village Haus, you may noticed a big circular section filled with stone. This is the exact spot the Skyway used to sit. When the Skyway closed and it was removed from Magic Kingdom, Disney filled in the foundation areas with stones.

♬ Something That I Want – Grace Potter

The Skyway used to connect Tomorrowland to Fantasyland at Walt Disney World’s Magic Kingdom. It was one of the original attractions when the Park opened in 1971.

Guests would get one-of-a-kind views as they passed over Cinderella Castle, Space Mountain, and the former 20,000 Leagues Under the Sea lagoon.

Although the Disney Skyway no longer exists, Disney World now offers the Disney Skyliner, which is its newest transportation option.

Did you ever ride the Disney Skyway? Let us know in the comments below.