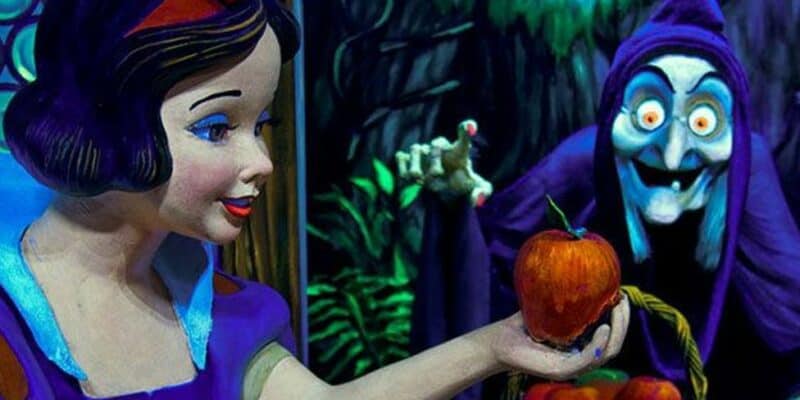 The recent reimagining of Snow White’s Scary Adventure to Snow White’s Enchanted Wish was done so that the attraction would appeal to a larger crowd and would be more friendly for children. Disney Imagineers were hard at work as they reimagined certain aspects of the ride, including creating a new scene that shares Snow White and The Prince’s first kiss.

Prior to the reimagining, when the attraction first opened as Snow White’s Scary Adventures, Guests continuously tried to steal the poison apple from the ride!

According to reports, when Snow White’s attraction first opened at Disneyland, Guests kept trying to steal the poison apple to take home with them as a souvenir. Guests were successful enough that Cast Members had to keep a basket of apple props nearby to replace it every time someone stole it. In fact, the apple got snatched several times per day!

Eventually, Imagineers replaced the physical apple with a projection to stop Guests from stealing the prop. To this day, the stolen apple props will occasionally come up for auction!

Currently, Guests can ride the reimagined Snow White’s Enchanted Wish at Disneyland, which is described as:

Did you know that Guests stole the poison apple from Snow White’s attraction? Let us know in the comments below.