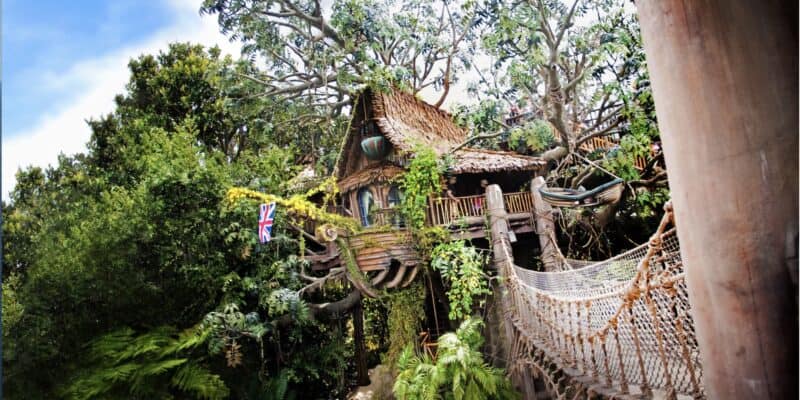 As we reported a few weeks ago, Disneyland announced that it would be closing Tarzan’s Treehouse in order to retheme the attraction and now, parts of the attraction are now missing entirely.

Tarzan’s Treehouse has been closed to Guests as it has been undergoing construction since September 2021, which is a longer timeframe than regular or seasonal refurbishments. The attraction will receive a new theme and backstory, but the treehouse experience isn’t going away, according to Disneyland officials.

As shown in a post on Instagram from @thecalibae we can see that the famous bridge is now completely gone. We were at the Disneyland Resort last September and took some pictures of the work being done on the attraction which you can see below:

As of now, Disney has not officially stated what the retheme will entail or include but we are excited to see how it turns out.

Tarzan’s Treehouse opened in 1999 to Disney Guests as a walk-through attraction that showcases the story of Tarzan with treehouse rooms that closely resemble those from salvaged parts from a shipwreck, according to the Disneyland attraction’s backstory. Before the attraction was Tarzan’s Treehouse, it was known as Swiss Family Treehouse, which opened to Disney Guests in 1962, and featured concrete roots, steel limbs, and 300,000 leaves.

At Home in the Jungle

Do you miss this attraction?

Comments Off on Parts of Disney Attraction Completely Destroyed During Retheme