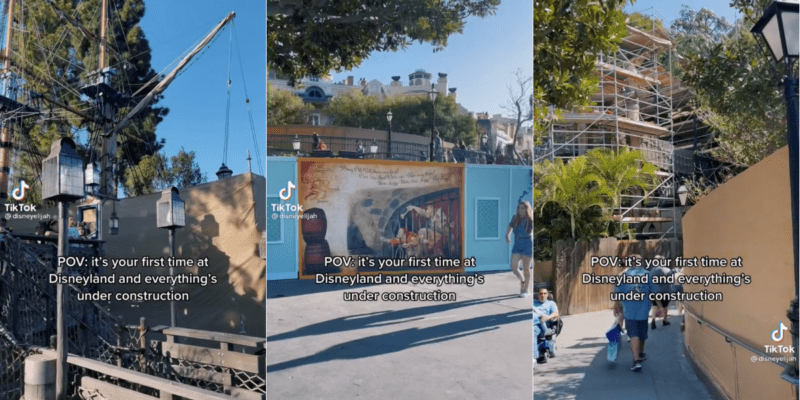 Visiting Disneyland for the first time is a magical experience for both the young and the young at heart. With iconic attractions, both classic and new, delicious snacks, and remarkable entertainment, Disneyland sure has a lot to offer Guests.

TikTok user Elijah (@disneyelijah) recently shared a video showing how “disappointing” Disneyland looks to Guests now that many attractions are currently closed for refurbishment, some with no announced reopening date.

Viewers were quick to voice their opinions stating that refurbishments and closed attractions can be seen on the Disneyland website, and though this is true, it’s hard to believe every Guest would know it before their first visit.

One comment that sparked controversy questioned Disney’s decision to close the attractions now instead of doing it during the lockdowns when Guests could not enter the Parks. While some viewers shared this idea, most comments explained how no work could be done due to Park closures and pandemic measures being enforced.

Elijah’s video mainly focuses on how the experience would be for Guests on their first visit, but many viewers commented they feel just as disappointed being returning Guests.

I would scream if this was my first experience LOL. #VenmoSpringBreak #macysownyourstyle #Disneyland #disneytiktok #Disney #disneyadult #trending #viral #foryou #fyp #foryoupage #4u

I would scream if this was my first experience LOL. #VenmoSpringBreak #macysownyourstyle #Disneyland #disneytiktok #Disney #disneyadult #trending #viral #foryou #fyp #foryoupage #4u

The most recent attraction to join the list of refurbishment closures is Pirates of the Caribbean, which closed only days before its 55th-anniversary celebration. Some other rides currently unavailable for Guests are Grizzly River Run, returning to Disney California Adventure on March 30, and Tarzan’s Treehouse and Finding Nemo Submarine Voyage, which have been closed since last year and have no official reopening dates.

Mickey’s Toontown is also closed for a complete reimagining of the land and is announced to reopen in early 2023, alongside the new attraction, Mickey & Minnie’s Runaway Railway.

While change, improvement, and upkeep are necessary for the Parks, seeing so many closed attractions simultaneously can be frustrating to many Guests, especially if they are experiencing Disneyland for the first time.

How do you feel about the refurbishment closures at Disney Parks? Let us know in the comments below!