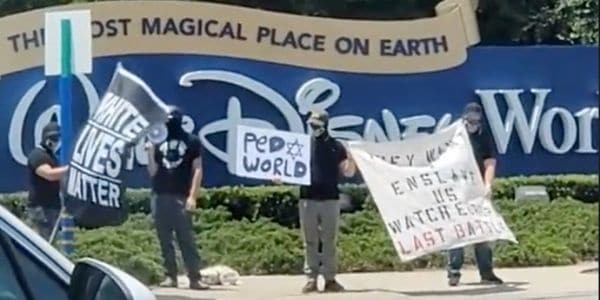 Several protesters could be seen walking around one of the entrances to the Walt Disney World Resort, with some holding incredibly inflammatory flags, symbols, and messages.

While Walt Disney World may be “The Most Magical Place on Earth”, the Resort has faced a lot of controversy in the last few months. Starting back with our story involving Disney supporting Florida legislators responsible for the state’s controversial “Don’t Say Gay” bill, Disney has been receiving tons of heat and backlash from fans, employees, companies, and the general public.

Since Disney eventually denounced the bill, key players within Florida’s government, including Gov. Ron DeSantis have spoken out against the company and are currently trying to completely dissolve Disney’s Reedy Creek Improvement District. This bill to dissolve the district has passed both Florida’s Senate and House of Representatives but recently, some concerned taxpayers have now possibly put a halt to this tense feud.

Amidst this controversy, Disney has seen multiple rogue groups of protestors show up at one of the entrances to the Resort, and recently video was captured of these protestors on TikTok. See the full video below from @parkineer:

As you can see, a small yet passionate group formed outside one of the entrances of the Walt Disney World Resort. Flags with “white lives matter” can be seen flying as cars drive by. Another flag simply reads “pedo world”. Another flag reads “they want to enslave us”.

This is now the second weekend in a row now that we have seen protestors storm this specific entrance to the Resort. We wonder if Disney will be considering taking action against future protestors and demonstrations. In the past, we have seen pro-DeSantis flags flown as well as swastikas and Nazi symbols.

At this time, Disney has not issued an official statement regarding the protests or the Swastika flag.

What do you think of these protestors?