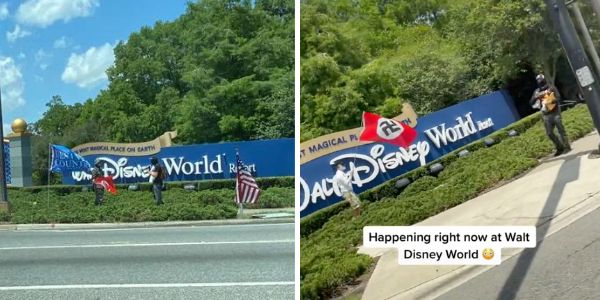 Several protesters could be seen walking around one of the entrances to the Walt Disney World entrance, with several holding incredibly offensive flags and symbols.

While Walt Disney World may be “The Most Magical Place on Earth”, the Resort has faced a lot of controversy in the last few months. Starting back with our story involving Disney supporting Florida legislators responsible for the state’s controversial “Don’t Say Gay” bill, Disney has been receiving tons of heat and backlash from fans, employees, companies, and the general public. All of this pressure ultimately pushed Disney CEO Bob Chapek to publicly denounce the bill, even offering the Human Rights Campaign (HRC) a hefty sum of money.

The HRC denied this contribution, citing the need to see more drastic action from the company. Since denouncing the bill, key players within Florida’s government, including Gov. Ron DeSantis have spoken out against the company and are currently trying to completely dissolve Disney’s Reedy Creek Improvement District.

All of this controversy has now pushed some rogue protestors to display their support and/or anger surrounding this topic in front of the Walt Disney World entrance as shown in a post shared on Reddit. Just a warning, there are offensive symbols within the photos:

What I saw in front of Disney World Orlando……. What’s going on??

What I saw in front of Disney World Orlando……. What’s going on?? from DisneyWorld

As you can see, a small group set up at the iconic purple welcome sign to show their support for Gov. Ron DeSantis as well as support with a very troubling flag. If you look close, one protestor can be seen with a swastika on their flag. While we do not know the identity of the person responsible for this flag or why they decided to fly it, it is certainly against the rules of Disney as well as the state of Florida to show this kind of support on private property.

This is unfortunately not the first time we have seen protestors take to the entrance of “The Most Magical Place on Earth”. We saw a group approach the sign a few weeks ago with some even covering the welcome sign with offensive wording. We hope that this does not become normal for the Walt Disney World property. Please know that this behavior is strictly prohibited and that these people were removed from property.

Have you ever seen any protestors at Disney?