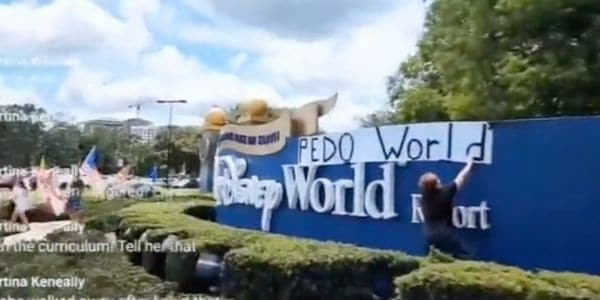 Recently, protestors blocked the entrance to Disney with some even covering the iconic welcome sign with an incredibly offensive message.

We recently saw “anti-groomer” protestors swarm Disneyland due to Disney’s now-firm stance against Florida’s newest piece of legislation and just a few days ago protestors showed up at Walt Disney World in Florida to do the same.

At the protest in the sunshine state, protestors set up a blockade in front of one of the entrances to the Walt Disney World Resort in support of Gov. Ron DeSantis. We covered this specific protest but there has been a further develeopement with some bold protestors even covering the iconic Disney World entrance sign with an offensive message.

The entrance sign that used to say “Walt Disney World Resort” was covered with a makeshift sign, replacing “Disney World” with the words “Pedo World”. This did not last long however with one brave person venturing into the crowd and tearing the sign down as shown in a Reddit post below. Be advised, there is explicit language used in the video:

We are unsure of what happened after the video ends but hopefully everyone involved was safe and left the scene unharmed.

Aside from all the hate The Walt Disney Company has been getting, Bob Chapek, the current CEO of The Walt Disney Company has also been getting a lot of heat online for his original inability to disavow the Florida bill as well, even sending a message to staff talking about why he doesn’t want to denounce it. We will continue to monitor this situation and write as more information comes out.

How do you feel about Disney’s stance on politiical issues?