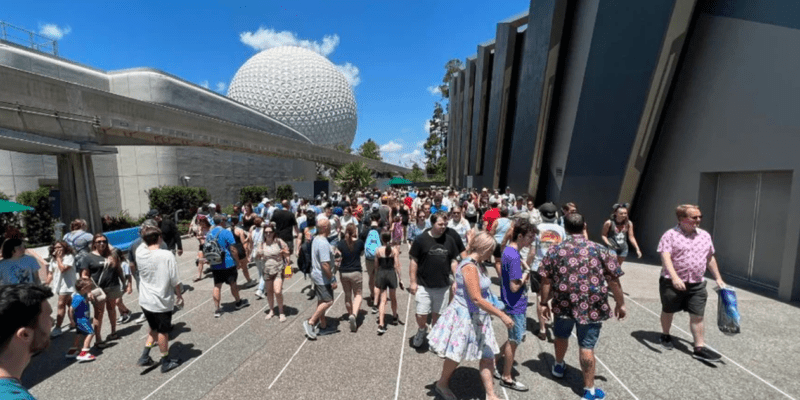 Cast Members, Annual Passholders, and Disney Vacation Club Members have been able to experience the upcoming Guardians–themed coaster — Guardians of the Galaxy: Cosmic Rewind — before it officially opens to Guests later this month.

The demand to experience the new roller coaster has been extremely high. Despite having limited capacity experiencing the ride, again right now the attraction is only running for Annual Passholders and Disney Vacation Club Members, the line has had to be extended on multiple occasions due to the number of Guests waiting to ride the coaster.

Reddit user, sneakerfreaker5, shared photos of the extended Cosmic Rewind queue, which was wrapped multiple times and into the outdoor area. You can see both photos below.

We do want to note that once Guardians of the Galaxy: Cosmic Rewind opens to Guests later this month, there will not be a StandyBy queue offered. The new roller coster will will utilize a virtual queue system, similar to when Star Wars: Rise of the Resistance at Disney’s Hollywood Studios and Remy’s Ratatouille Adventure at EPCOT opened.

The upcoming roller coaster will be family-friendly and will offer exciting thrills with an innovative ride vehicle that offers 360-degree motion for riders.

Guardians of the Galaxy: Cosmic Rewind opens to the public on May 27, 2022.

Are you going to ride Guardians of the Galaxy: Cosmic Rewind when it opens? Let us know in the comments below.