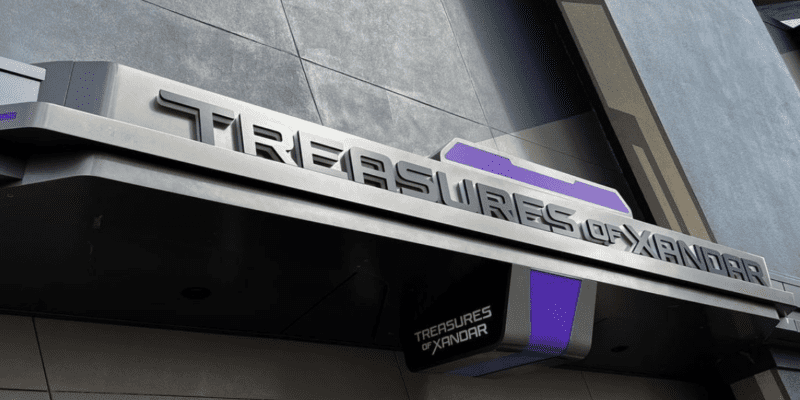 If you are a fan of Disney, you surely have been awaiting the opening date of a few attractions. At Magic Kingdom, TRON Lightcycle/Run is an attraction many have been looking forward to, however, construction has been taking years and there is no opening date set for the ride at this current time. At EPCOT, however, Guardians of the Galaxy: Cosmic Rewind is a coaster that is equally anticipated.

Imagineer Zach Riddley has now shown a first look at the gift shop that will accompany that attraction. Riddley stated:

Another exciting milestone this morning at the Wonders of Xandar pavilion as we announce and reveal our merchandise location: Treasures of Xandar!

This store is operated by The Broker, a proud Xandarian, who’s been awarded the contract and brought part of his famous store here to EPCOT. Some of the merchandise pays tribute to Xandar and items acquired throughout the galaxy and, of course, some items celebrate The Heroes of Xandar, the Guardians of the Galaxy.

The Broker also shared the following with our WDI team recently: “I am so delighted to bring my wares to the Wonders of Xandar pavilion. As a proud Xandarian, it gives me great pleasure to represent my planet to you Terrans and allow you to bring home a small bit of Xandar from my shop: Treasures of Xandar. I only hope that it brings our two cultures that much closer together.”

Seeing these design elements come into place completes years worth of dreaming and creating by our talented team. And the results are out of this world! We look forward to inviting all of you to the opening this summer as part of Guardians of the Galaxy: Cosmic Rewind at EPCOT.

It seems that the storyline will continue throughout the gift shop, which will continue the immersive experience for Guests. Although it is often assumed that a gift shop would accompany a new ride, this is our first look at Treasures of Xandar!

Disney Imagineering spoke on the story of the attraction, and how it makes sense and fits into EPCOT quite perfectly. Of course, we know it is located to Mission: Space and Space 220, which works great, but it seems that this attraction will actually bring an all new pavilion into the theme park, as mentioned by Disney! The people of Xandar have come to World Discovery, which is where our coaster story begins! Now, Guests will be able to enjoy the World Showcase pavilions and see the details of the countries, as well as see Xandar brought to life as the planet and its Nova Corps have decided to establish Epcot’s first “Other-World Showcase” pavilion.

What do you think of the Guardians of the Galaxy: Cosmic Rewind attraction?