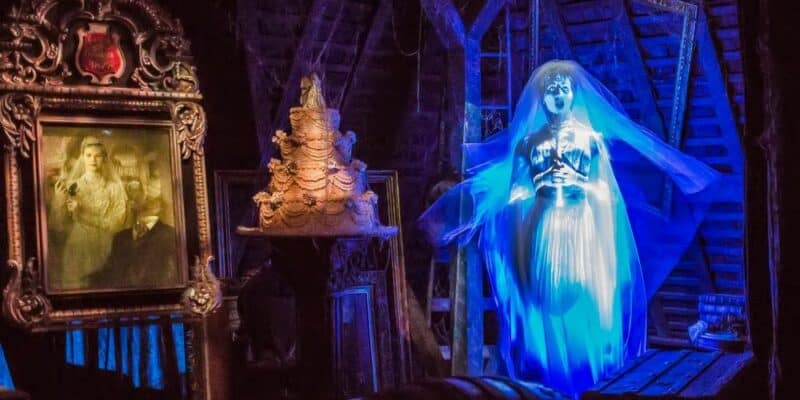 The Haunted Mansion is one of the most popular rides at Walt Disney World Resort. An opening day attraction, the eerie abode has been available to Guests since Magic Kingdom Park opened its gates for the first time on October 1, 1971.

The ride hasn’t undergone many significant changes since it first opened but, this week, some new “apparitions” appeared in front of the Haunted Mansion, delighting Guests.

Reddit user u/BardtheBargeman shared a photo of two Cast Members dressed as a bride and groom standing on the grounds of Master Gracey’s former home. The Redditor quipped:

One commenter asked, “Are these cast members or is it a wedding shoot?”

The original poster clarified that they were, in fact, Disney World employees without breaking theme, “They were cast members, in their mortal lives.”

From time to time, special characters appear throughout Walt Disney World Resort, so it is possible that you could see these special apparitions during your next visit too!

Although we don’t know that the Cast Member was portraying Constance Hatchaway, the character is the most famous bride associated with the Haunted Mansion. One explanation of her rich background story, created by Walt Disney Imagineering, reads, in part:

Constance Hatchaway was a beautiful woman born in Money County, California supposedly in the year 1851. By 1869, an 18-year-old Constance had moved to Secret County, California where she became engaged to a young farming-heir named Ambrose Harper. Not long into their marriage, the teenage Constance murdered Ambrose with a hatchet via decapitation. Being Harper’s wife, she inherited much of his estate while also keeping his severed head within a hatbox as a twisted souvenir.

Hatchaway ultimately became a “black widow” serial killer, murdering various husbands until she herself met her demise in 1927 at the age of 76.

The official description of the Haunted Mansion reads:

Are you a Haunted Mansion fan?