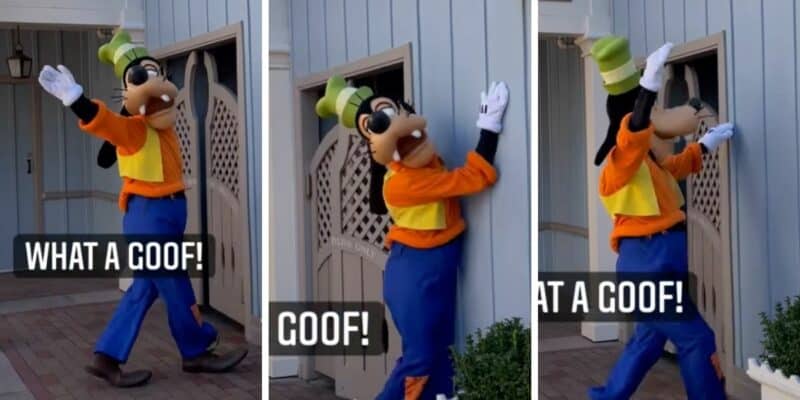 Walt Disney World is filled with unique experiences, including family-thrilling rides, one-of-a-kind shows, and of course, meeting some of our favorite characters such as Mickey Mouse and friends, the Disney Princesses, and even some Pixar pals.

Recently, Goofy and Pluto, two members of the Fab 5, were greeting Guests at Disneyland Park. The duo were ending their time out in the theme park and making their way backstage when suddenly, Goofy ended up being, well, goofy..

Disney fan Danielle shared a video of Goofy waving goodbye to Guests right before walking into a wall, captioning it:

Goofy is all of us when we’re not ready for the weekend to end! 😖

Related: Disney Characters Get New, Upgraded Look at the Parks

It seems as though Goofy actually did this on purpose as his rebound was not harsh. He seems to be okay and his mishap certainly gave Guests a good laugh — we can always rely on Goofy for being silly!

Guests used to be able to meet Goofy at Mickey’s Toontown — a land located at Disneyland Park which allows Guests to go into Mickey Mouse’s home, Minnie Mouse’s home, Donald and Daisy’s boat, Chip and Dale’s Tree, and Goofy’s house! Guests can also ride Roger Rabbit’s Toontown Spin and check out other fun aspects of the land.

However, Disneyland recently shut down Mickey’s Toontown as it is undergoing a complete overhaul. The reimagining of Toontown will bring new experiences to families and young children, including new play experiences, as well as open, grassy play spaces for everyone to unplug. The entire theme of Mickey’s Toontown will include “a vibrant symphony of sights, sounds, and sensations,” according to Disney.

Is Goofy one of your favorite Disney characters? Let us know in the comments below.

Comments Off on Video: Goofy Walks Into Wall As He Waves Goodbye to Disney Guests