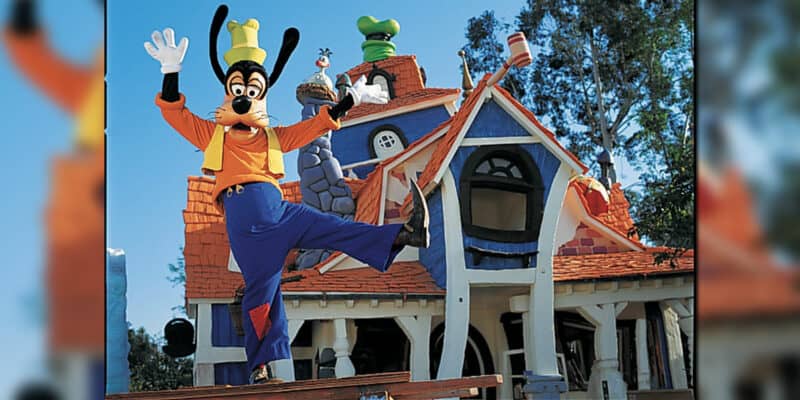 Mickey’s Toontown is a land located at Disneyland Park which allows Guests to go into Mickey Mouse’s home, Minnie Mouse’s home, Donald and Daisy’s boat, Chip and Dale’s Tree, and Goofy’s house! Guests can also ride Roger Rabbit’s Toontown Spin and check out other fun aspects of the land.

Recently, Disneyland shut down Mickey’s Toontown as it is undergoing a complete overhaul. Prior to its closure, a child was caught on video trespassing and sneaking into Goofy’s house so he could give the Disney character a hug.

As Disneyland operates during the ongoing pandemic, the theme parks have made some adjustments to the rules and regulations so Guests and Cast Members stay safe during this unprecedented time. One of those changes is implementing socially distanced character meet and greets. At this time, Guests visiting Disneyland can see Disney characters from afar, but cannot currently get close enough to give them a hug or get their autograph.

On a recent trip to Mickey’s Toontown, Guests were able to spot Goofy outside of his house and Guests could take a socially distanced selfie from afar. One child, however, wanted to see Goofy so badly he snuck into Goofy’s house and ran up behind Goofy!

You can check out a video of the interaction below.

Of course, the child did not know better and so, the child was just simply escorted back to his family, but it seems Guests and Cast Members got a laugh out of this as no one figured out how the child even ended up back there!

More on the Reimagining of Mickey’s Toontown

The reimagining of Toontown will bring new experiences to families and young children, including new play experiences, as well as open, grassy play spaces for everyone to unplug. The entire theme of Mickey’s Toontown will include “a vibrant symphony of sights, sounds, and sensations,” according to Disney.

Have you ever visited Mickey’s Toontown at Disneyland? How do you feel about the upcoming reimagining? Let us know in the comments below.