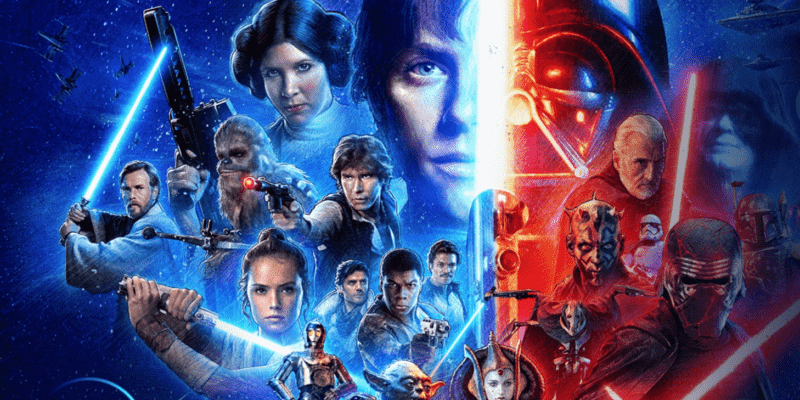 When photos of Lucasfilm’s 2021 employee Christmas gift leaked, so, seemingly, did a new Disney+ Original Star Wars series based on the popular “Tales of the Jedi” series.

The packaging the gift came in [below] featured a “Star Wars: Tales of the Jedi” logo that appears to tease an as-yet unannounced Old Repubic-era series:

It’s no secret that many Star Wars fans are desperate for more content from the Old Republic era. Before the official announcement regarding the “Knights of the Old Republic” video game remake, fans even launched a petition that got thousands upon thousands of signatures.

Now, as a result of the apparent upcoming show — which remains unconfirmed by Lucasfilm, Ltd. and The Walt Disney Company at this time — the original “Star Wars: Tales of the Jedi #1″ comic book has skyrocketed in price.

The issue has climbed on Covrprice’s list of top 10 comics for the first week of January 2022. The Dark Horse Comics publication is in the number four spot, ahead of numerous Marvel Comics. Covrpice notes that it has a “raw FMV of $40” with “a high sale of $300 for a CGC 9.8.” This means that the comic book needs to be in mint condition to sell for the $300 price point.

For those who may be unfamiliar with eight-story-arc Dark Horse Comics’ “Tales of the Jedi” series, it is described as:

…six of the eight Tales of the Jedi story arcs take place during the time surrounding the events known collectively as the Great Sith War, a conflict instigated by Sith forces aimed at galactic domination. These six story arcs nominally focus on the Jedi Knight-turned-Sith Lord Ulic Qel-Droma; his love interest, Nomi Sunrider; and a cast of supporting characters, including Ulic’s own brother, Cay Qel-Droma. Likewise, first appearing in Dark Lords of the Sith, the fallen Jedi Exar Kun went on to become a Dark Lord of the Sith and wage war against the Republic and Jedi. The remaining two story arcs, The Golden Age of the Sith and The Fall of the Sith Empire, occur in the year 5000 BBY and revolve around Sith Lord Naga Sadow and his schemes to invade Republic space through his manipulation of the Daragon siblings, Gav and Jori.

Again, at this time, a “Tales of the Jedi” series has not been officially confirmed, but the leaked Christmas gift and the general excitement of the Star Wars fan community seems to indicate that a galaxy far, far away may be headed in that direction.

Would you enjoy a “Tales of the Jedi” Disney+ Original series?

Next, Star Wars fans can enjoy the debut of Ewan McGregor and Hayden Christensen’s Obi-Wan Kenobi on May 27, 2022.